We woke up in Jasper and had some oatmeal for breakfast. We packed up quickly and headed out, feeling we’d more than enjoyed our beautiful site. We drove to Athabasca Glacier and hiked the Tongue of the Glacier, a 1.8k hike up scree to the glacier. It was so cold – I’m glad we were dressed appropriately because despite the warm day, it was freezing near the glacier. It was so distressing to see the recession of the glacier over the years. We are doing so much irreversible damage to our fragile ecosystem. It horrifies me that we seem to be collectively hurtling toward an unfamiliar planet that has no capacity to sustain us. Are we not listening? Watching? Feeling? 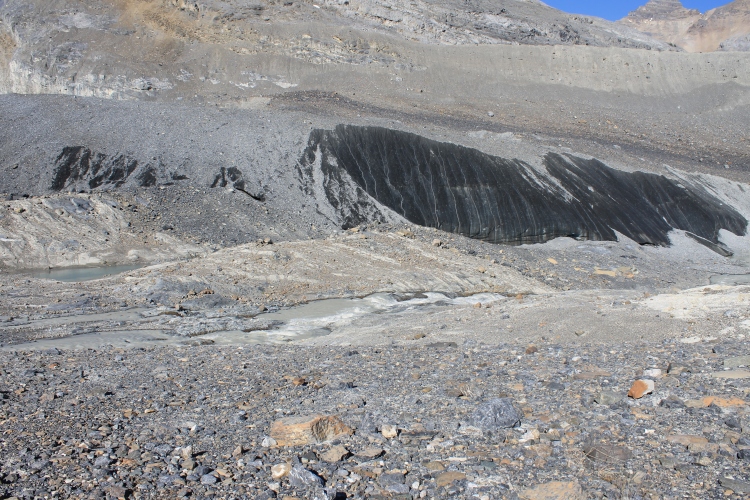 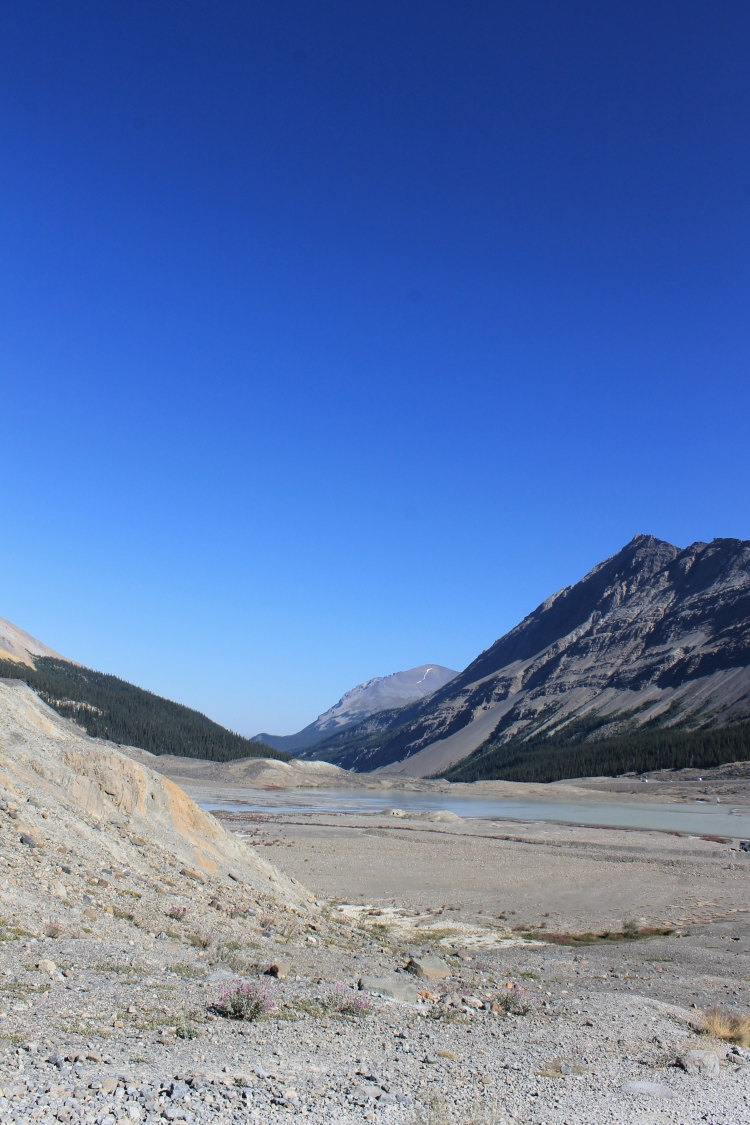 We were sombre when we returned to the car. We drove to Sunwapta Falls, which was so busy but very beautiful and we saw a lovely rainbow. Then Christine and I hiked the Lower Sunwapta Falls trail, a 2.6 that was moderate enough to go side-by-side for the first little bit, and then got a little trickier as it went down. It wasn’t busy, though, and that’s always nice. It’s so important for me to find the less populated spaces so I can feel like myself. Christine and I had a really good conversation, which hiking always lends itself to. The falls were lovely and we enjoyed our time our there, in the shade of the trees but still enjoying the warm day. 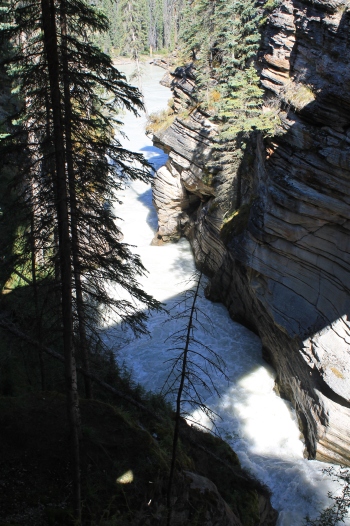 After returning to the car, we made our way out of Jasper National Park and took highway 5. I drove for ages. Christine got some sleep, but not much. I listened to music on our road trip playlist and watched the scenery change again. I remember this one mountain in the distance, you could see the snow-covered cirque looming above the others surrounding it. I drove closer, then away, nearer, then made a turn that left it out of sight. We played this for what seemed like hours until, without fanfare, I simply passed it and it was gone.

It was getting late by the time we made it to Wells Gray. It’s renowned for its plethora of waterfalls, so we were really looking forward to this one, willing to pay the provincial park cost. However, the staff at the service desk told us they were all full, no campsites available. We’d had luck before so we decided we’d see where we got and if we got to see a bunch of waterfalls along the way, awesome. But we planned to move on to Kamloops and see if we could find a place to park and camp in the car if our luck had run out.

The road through Wells Gray was ROUGH. Oh my gosh, Christine’s little car was just not built for that type of violence. We were washboarded almost off the road a couple times, dodging potholes and just suffering. It was also really foggy with smoke and there were wildfires in the park itself, so many trails were closed. Most of the backpacking trails were closed in Jasper and in this park as well, because they just couldn’t justify the potential need for rescues when there was so much fire risk.

Though the sun was still relatively high in the sky, it was a murky red circle. It was so odd; I’d never seen anything like it.

We travelled down the road to Norman’s Eddy, a short trail, and hiked about 500m to the water where we tried to bathe, although it was freezing cold and the current was really strong – we think we missed the eddy because it seemed kind of just like a raging river. We hiked back soaking wet and chilled. Worth it!

We also stopped at Bailey’s Chutes, which was kind of neat because it was like rapids that extended as far as you could see. However, Helmcken Falls was the absolutely standout. It is a tall, mare’s tail waterfall that has carved out a beautiful bowl below, the cavern extending far behind the water itself, and the walls draped in green moss. The churning water below kept massive logs circling and bashing against the stone walls in an endless attempt to flee. We remained there for some time. 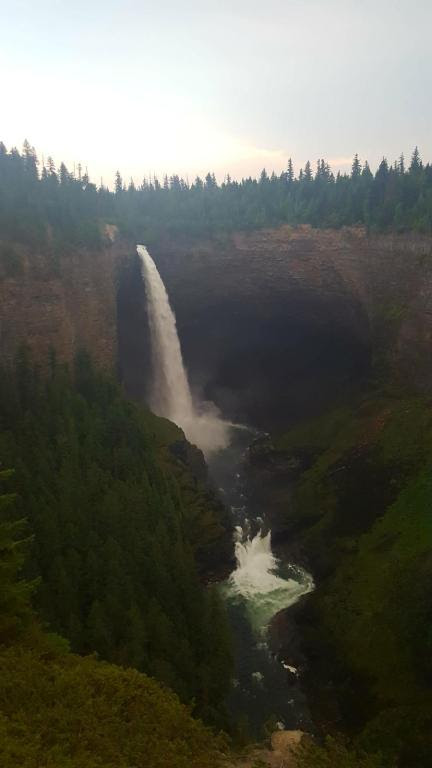 After, we attempted another hike to a sight, but we were absolutely swarmed by mosquitos and we had to bail. It was brutal! Still, the lush forest had a rainforest vibe, and we saw many interesting plants that Ontario doesn’t have.

It was after 9pm by the time we made it, inch by inch, out of the park. I was so relieved to be back on a proper road after that! Kamloops was smoky, and the lights looked dimmed, like they were trying to shine through gauze. The fires really were eerie. I can’t imagine living there. Ontario is so wet most of the season, with floods in the spring and periodic rain throughout the summer, not to mention countless lakes. Dry weather is just not something that I’m all that familiar with, and I found it really alarming. I can’t stand the feeling of being thirsty and something about these provinces, maybe it was in my mind, but I felt thirsty the entire time.

The drive to Kamloops was fine until it got dark. The speed limits in BC are 110 and 120km per hour and the roads are so twisty, and I couldn’t tell when I was on solid ground or when the guardrail next to me was the only thing between us and a chasm of doom. It was a brutal drive, the worst of the trip. I couldn’t wait for it to be over.

Finally, we arrived in Kamloops. We had the wal-mart in the gps and got there only to find out it absolutely does not allow for overnight parking. We moseyed over to the info centre where a few other cars were parked. We felt pretty confident that it would be all right, so we did the big bin swap, crawled into the back seat, and crashed. It was almost midnight.