Christine slept all right in our first parking lot of the trip; but me, not so much. The lot was noisy – not only did other people set off their car alarms, but after grumbling and complaining about Those People, we did it too! How embarrassing. And people were racing and partying in the parking lot – not a good time. Not all parking lots are created equal!

We cleaned ourselves up in the wal-mart bathroom. I picked up a sharpie, and we got ice for the cooler bag and some pringles. We were on the road by 8:30am.

We drove until the provincial border. Our first border crossing – Manitoba! I had never been before. Christine had driven out west with my dad a few years prior; a very different experience as they primarily stayed in hotels and it also rained on them almost the entire time! Still, it was funny and a little annoying when she would point out these vaguely familiar landmarks that would look so different in different weather. I say annoying because sometimes my little green monster would object to her having done something that was supposed to be Ours with someone else (even though they did it first – I didn’t say it was reasonable!).

We went into the information centre and got two free Manitoba pins and a map from the very friendly and helpful staff. We only stopped to get gas and then on to Winnipeg. Manitoba was only just becoming flat, the kind of flat where the road ahead looks like water because it’s right at eye level. It’s an odd illusion.

The streets in Winnipeg were confusing and our GPS was not our best friend. We wanted to go to MEC so I could return some things I’d purchased earlier in the year that I hadn’t been able to yet. The MEC trip was fun and we tried on some clothes but nothing really worked for us so we got back on the road.

We stopped at a fruit stand and got peas, corn, cherries, and grapes. It was fairly pricy and ended up being a lot of fresh food, but we definitely enjoyed the haul. We stopped in Portage La Prairie at a heritage museum. Initially we just wanted to stop and eat lunch. We had cheese and crackers and peas. There, I found a camera case for my EXACT camera that someone had left behind. I carried it while we walked around in case it belonged to someone and they were still there, but we didn’t see any other visitors. We entered the museum and they had an awesome virtual reality headset so you could experience the caribou habitat as the animals saw it. It was really neat and I wanted it to do more than show the same snow and trees that I see on my walks! I guess that wasn’t the point though.

Christine pointed out as we left that we had gone in the back way and therefore had likely skipped paying. Since we’re on a budget, we didn’t go back to pay, but I recommend it. It’s very cool.

We drove north to Riding Mountain National Park. Now, this place was hopping. It seemed so remote, and it truly was, with nothing on the several hour drive except farms, but wow was it packed once you officially arrived. It was the long weekend, true, but also, it is the only national park anywhere near it. Whereas Ontario has parks left and right, it’s not like that in Manitoba. It was like a little city and they were booked solid. We got put into the overflow camping, our first experience with that. We wouldn’t realize what a shitshow this one was until we experienced the splendor of overflow in Jasper. This was basically a grassy parking lot. No trees between sites. Enough space for a car and a tent. 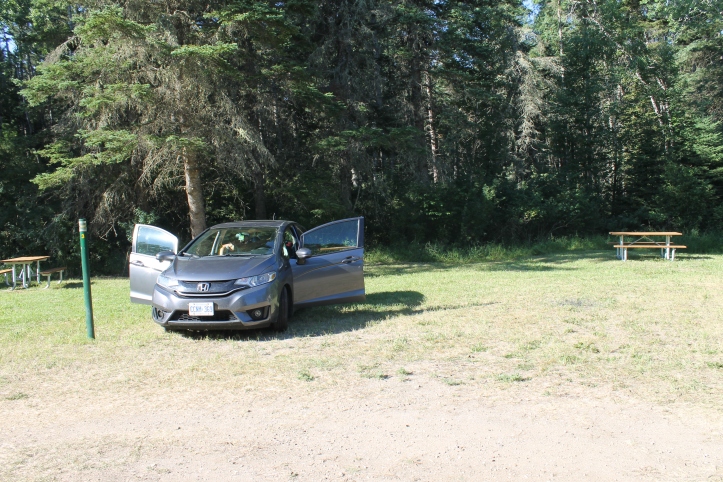 There were some mix-ups with people being confused and setting up in the wrong spot. We thought we were sorted, so we went for a walk along the bike path. No bugs here! We had a wonderful conversation about some of the stressors we were dealing with back home. It’s incredible how big everything can seem when you’re in it, and then you leave for 6 weeks and suddenly everything feels manageable. Everything will get by without you. No one and nothing needs you so desperately that they can’t deal with 45 days of absence. This is such an unequalled freedom in leaving everything behind. It highlights the importance of everything you bring with you – including and especially the person you choose to have by your side. This trip would prove to strengthen my relationship with my sister, despite all the struggles we would be confronted with – including the one we were about to return to. 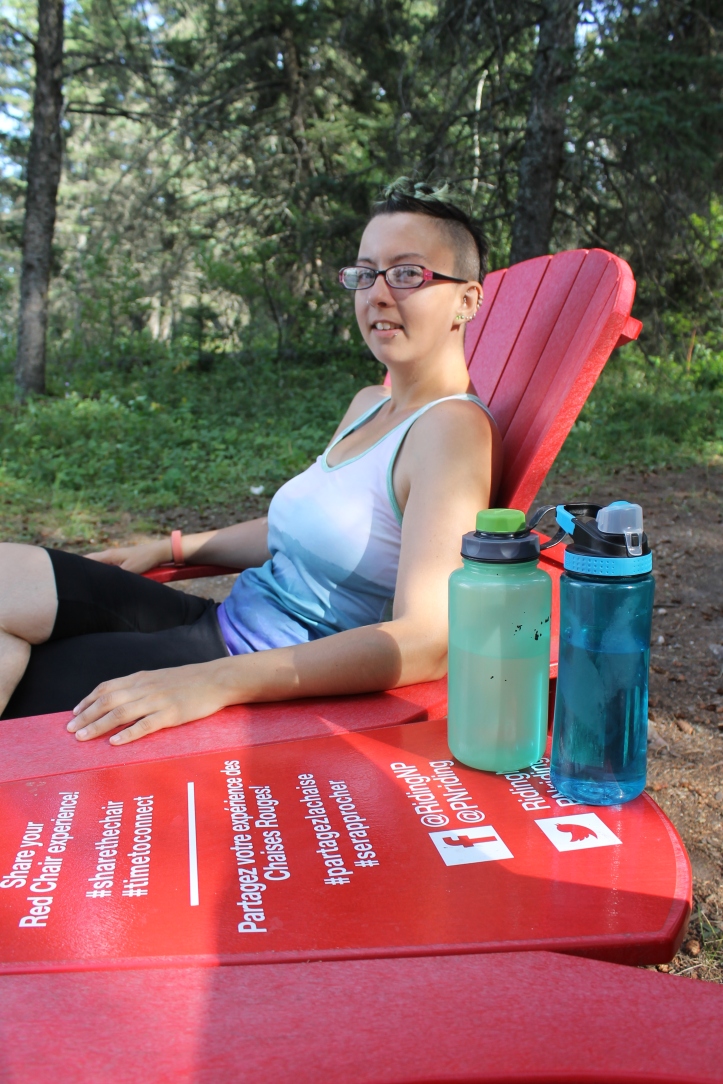 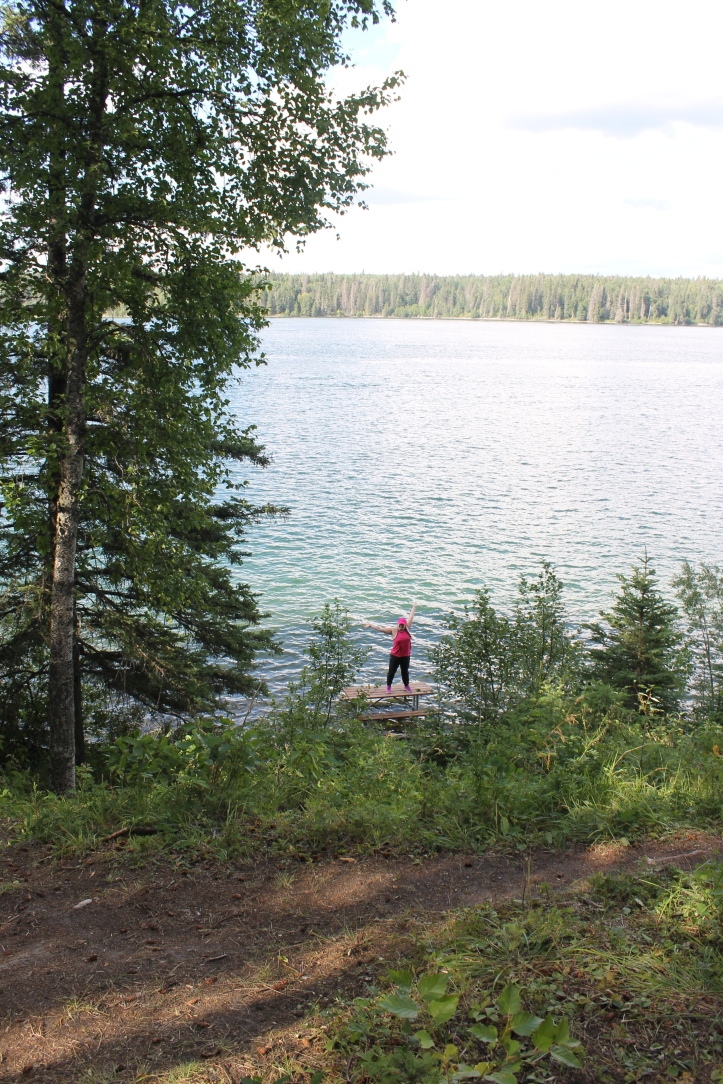 Eventually we turned back to our campsite and found out that other people were literally on our tiny site with us. This stressed me out so much. It was a louder couple and I didn’t get an amazing vibe from them. I didn’t want this situation to be happening, but I dealt with it and my sister was good dealing with me. She handled everything perfectly and acted like a bit of a barrier between me and the surrounding people. I like my space – and I kind of like to know what to expect in situations where I’m going to be vulnerable, like sleeping.

For dinner we made spinach vermicelli with mushroom soup and it was so tasty. We also ate some of our fruit and peas. After dinner, we went for a stroll down by the water. There was a beautiful orange sunset behind the stark black trees. 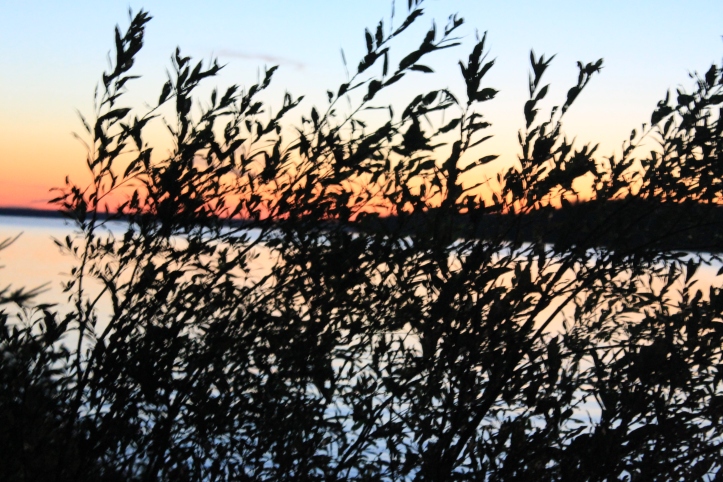 Our neighbours were noisy, playing beer darts, so I went for another walk later while the moon was high in the sky. I enjoyed some solo time. I also made sure to leave some commentary in the vault bathroom with that sharpie. Just a reminder that women’s liberation is nigh!

We settled in for the night and read in our tents. It was to be a long night, with people coming and going, including someone who drove over a site marker post with their minivan. We woke up to park people reinstalling it.