We drove on and stopped at Ouimet Canyon, which is such an interesting place and so ecologically fascinating. The top and the bottom of the canyon are completely different temperature/eco zones, and at the bottom there are lichen and plants that only grow in Arctic tundra. It was beautiful.

Like, I don’t even feel guilty for not having visited other provinces before except by plane because after almost 2000km, we still haven’t left Ontario. We would come to know it as the black hole. And better yet, we would be driving all the way back through it in order to go east.

We woke up that morning to pouring rain. Neither of us are amazing under these conditions, but I have a good strategy for bailing as quickly as possible. We packed up fast and wrapped the tents in a tarp because they were filthy and we didn’t want to stand in the rain while stuffing them into their respective sacks.

We got pretty low on gas before finding a station to fill up at. Christine bought energy drinks which jumpstarted my unexpected addiction to the “orange monster”. I’ve never been an energy drink person – I’m much more drawn to coffee. But with the heat, it was hard to get my caffeine that way, and I can’t bear the plastic waste from iced coffees, so I embraced my new vice. I also bought chips. I probably spent about $75 on chips on this trip – wait ‘til you see what I paid in Banff!

I changed my clothes in the bathroom – I’d bled through. I’d got my period on the first day and already I was running out of cloth pads. I think the sitting for long stretches causes a tsunami when I stand up, because with my menstrual cup I don’t usually floweth over quite so dramatically. Yet another road trip perk.

I had a phone job interview with my agency, so we stopped around 11am so I could do that. It was only about half an hour. I didn’t end up getting that job, but I’d be back applying by the time we go to Newfoundland for another position – that I also didn’t get. (I have other really amazing things working out for me, but at the time, this was devastating).

We drove on and stopped at Ouimet Canyon, which is such an interesting place and so ecologically fascinating. The top and the bottom of the canyon are completely different temperature/eco zones, and at the bottom there are lichen and plants that only grow in Arctic tundra. It was beautiful. 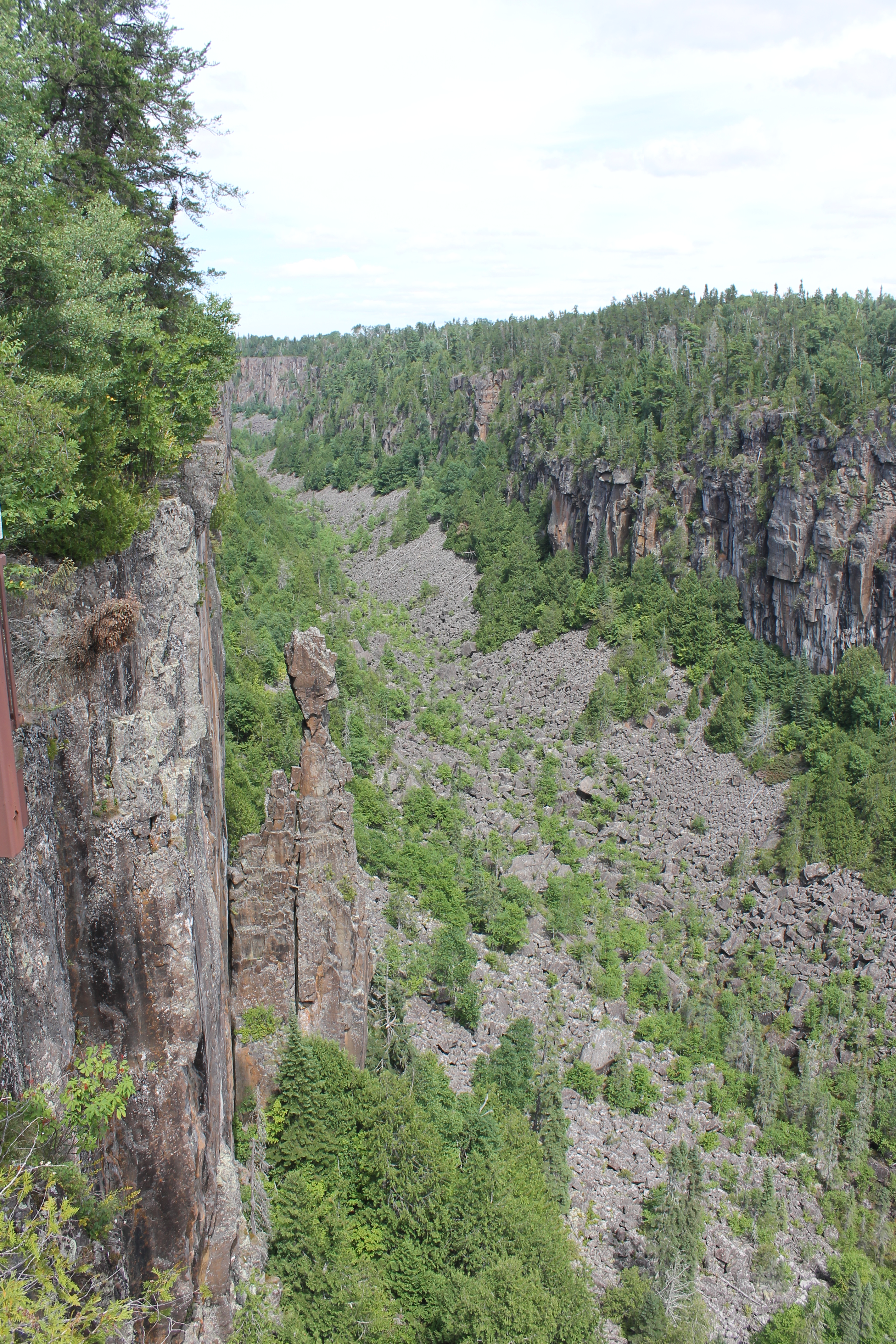 The hike to the canyon was about a kilometre loop. We had laid out our tents to dry all over the grass by the parking area (with permission). The sun was beating and we enjoyed photographing plants and butterflies before returning to brush the dirt from our tents and packing up again.

By the time we made it to Thunder Bay, stopping at the Terry Fox memorial, we’d decided to pass on Sleeping Giant Provincial Park. It was quite a bit out of our way, it was a provincial park therefore not our goal destination, and it was raining and our plan included a 22k hike. All told, it was the right decision to drive on. It gave us an extra day in the itinerary as well.

I was driving and I had a song stuck in my head – for the life of me I couldn’t remember almost any words, nor the artist, nor the song title. I could only remember that they were KIND OF like this other band, and that MAYBE a couple lyrics went like this. So Christine couldn’t figure it out and it was making me crazy because I loved the song and I wanted it on our playlist. After about an hour, I made her look up the Billboard charts for 2015 and then 2014. She was not impressed with me. She read through any possibilities and I swear she was ready to take the wheel and steer us into a cliff before she read “Let Her Go” by Passenger. That was the one! All of the lyrics I remembered were wrong, but we did it!

I have in my notes that the low point of this day was being hangry and pushing my sister’s rain coat at her at the gas station. Writing this now, I don’t even remember doing this, but there were many tense moments because we spent nearly 24 hours a day together every day for 45 days. That’s a lot to ask, even from sisters.

We got gas again in Ignace and then drove on to Dryden. We’d been searching desperately for a restaurant to eat at because we’d be sleeping in the car and wal-marts don’t always care about that, but definitely don’t want you cooking in the parking lot. We finally found a Chinese food place in Dryden that was end-of-the-day-done, way too expensive, and with almost no choices. But we filled up because we were desperate and committed. After, full and unsure about the repercussions that could come from that, we drove on to Kenora.

So, sleeping in the car. You can tell right away whether a wal-mart allows overnight parking because you’ll see the ‘RV Village’. This sight became a treasured one! We’d drive in and see rows of campers, RVs, big vans, buses, and tractor trailers. We weren’t always the only ones in cars, but I’d argue we were the ones in the smallest car with that much gear.

In the back of Christine’s car are our 5 bins. Hers, mine, shared gear, dry food, and cleaning/cooking. In addition, we have a ten litre water jug, a cooler bag with all our electronics, a cooler bag with our perishables, two camp chairs, two yoga mats, a bag for recycling, hiking poles, two tents, hiking boots, and various other items. ALL OF THAT has to go in the front seats of her cat with the seats pulled up in order to give us the space to lay down. I was lucky – I was on the passenger side so I could push that seat right up. Christine couldn’t, because we needed extra space due to the steering wheel. On our first night organizing this, we weren’t exactly smooth. It took some shifting and rejigging and it wasn’t as perfect as we would get it later, but it worked. The front of the car, from footwell to visor, was stuffed.

In the back, we laid out our yoga mats and sleeping bags. The first night we slept with our heads to the front of the car, but the lip from the folded seats got us both in the hip. I think both Christine and I began to worry about how this would play out night after night.