After three hours on the water, we found our island! It was very small. We pulled up next to a houseboat that was moored on the dock. They offered to help but it’s my experience that something like that only needs a couple hands, and it’s good practise to make sure you can do it alone, so we passed on the offer and got ourselves out of the canoe and up on the dock.

I woke up earlier than Christine and decided to spend some time by myself at the water. I walked the long way there, stopping at the bathroom first. The morning was cool but I could tell it would heat up soon. Mist hovered over the lake until the sun evaporated it all. I returned to the camp and we took our time packing up and getting on the road. The next park, Thousand Islands National Park, was within a couple hours’ drive, and the plan was to get there, talk to the parks people about renting a canoe, and pick a place to camp. I had canoed interior with Outward Bound a few years previous, and I was really confident as a canoeist, but Lake Ontario is huge and can get a little rough, so with the excitement there was certainly some trepidation.

That turned to outright frustration when we arrived at the park a couple hours later. There were no parks staff there whatsoever and so indication as to why. Maybe the park was only open on weekends after the summer ended. We really struggled with what to do because navigation wasn’t something that I felt comfortable with without at least consulting with parks staff. We were annoyed and short with each other because we really wanted this last leg of the trip to go well, and although we could have just called it and driven home and been back that night, neither of us actually raised that as a possibility. We really wanted to make this work!

We called a couple marinas and finally found one that would rent us a canoe. Whether it was cheaper than what the park could offer, we weren’t sure. The marina itself was, to be frank, a nightmare to deal with. We tried to get people to help us but no one seemed to care that we were there and waiting. Eventually we grabbed someone and started the process of renting the canoe. The staff also walked us through the nautical map and how to read it, which was really helpful. And actually he loaned us the map, which was obviously their store copy.

After a couple hours, during which time we also got our bags all packed up with the groceries we had stopped for, and checked and double checked our gear for the next two nights, we were ready to get on the water.

We scooted the canoe into the lake and off we went! I sat stern and Christine was in the front. We were on our way to Gordon Island, one of the many tiny islands in the area. We would pass many islands, both larger and smaller, on the way to our destination. We chose Gordon Island because it had very few campsites and was small without a large dock. We didn’t want to battle for space or quiet amid motorboats. The sites were non-electrical. If we arrived there and the campsites were taken, we had options to move on to other islands nearby. 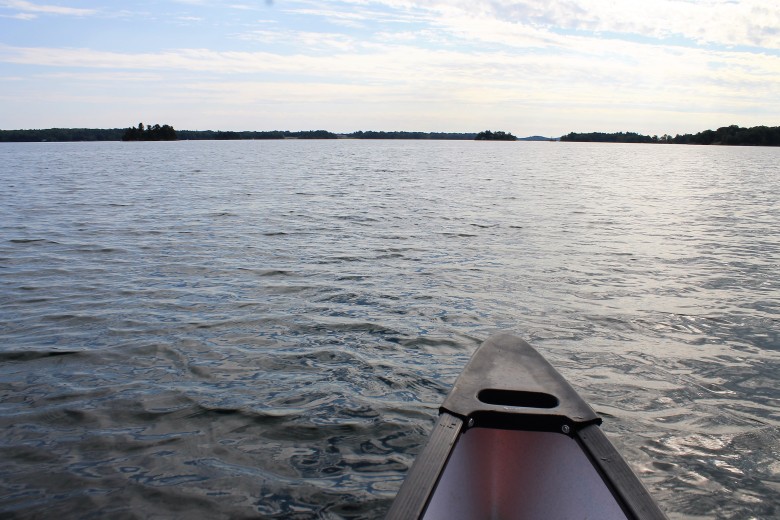 It was late by the time we got on the lake; almost 4pm. The guy at the marina told us the trip would only take about an hour, but I knew in the first fifteen minutes there was no way that could happen. The time in the canoe was so fun and beautiful. We saw lots of ostentatious houses on the shoreline, calling to mind yet again the severe inequality between those with money and those without. It seems baseline absurd that some people have two houses when others are homeless. It just strikes me in the deepest corners of my being that this degree of injustice cannot be sustained.

The map was very helpful in our navigation but at some points it was unclear enough that we had to use Christine’s GPS to get us there. That was a little nerve-wracking because we knew we would need to save battery for emergencies and also for direction on the way back. We had to canoe up pretty close to islands that we passed just to see if they were Gordon Island.

After three hours on the water, we found our island!

It was very small. We pulled up next to a houseboat that was moored on the dock. They offered to help but it’s my experience that something like that only needs a couple hands, and it’s good practise to make sure you can do it alone, so we passed on the offer and got ourselves out of the canoe and up on the dock.

We explored the island. There was one site right by the water, away from either of the docks, and two sites in the middle of the island, a bit closer to a dock. The one we wanted, the former, was occupied, and would be the next night as well. Bummer! We went to the better of the two centre sites and set up. No one else came to use the second site next to us, so it was more private than it otherwise would be, but we could certainly hear the people on the houseboat and their loud music. I was concerned there would be foot traffic around us but we were off the path to the bathroom. There was a large stone gazebo nearby, which we had to ourselves.

Parks officers arrived at the island, to our surprise. They were there to measure the regrowth of the oak trees, which had been growing after a controlled fire on the island a couple years ago. It was interesting to learn from them about the parks efforts to maintain native growth and slow down invasive species.

Our dinner that night was baguette crackers and brie with red pepper jelly. Not the backpacking food I’m used to when I go interior! But it felt like a luxury and we were really happy with it.

The island was small enough that we probably did three laps of it, exploring, looking for sites, finding bathrooms, and looking for a good swimming spot for the next day. 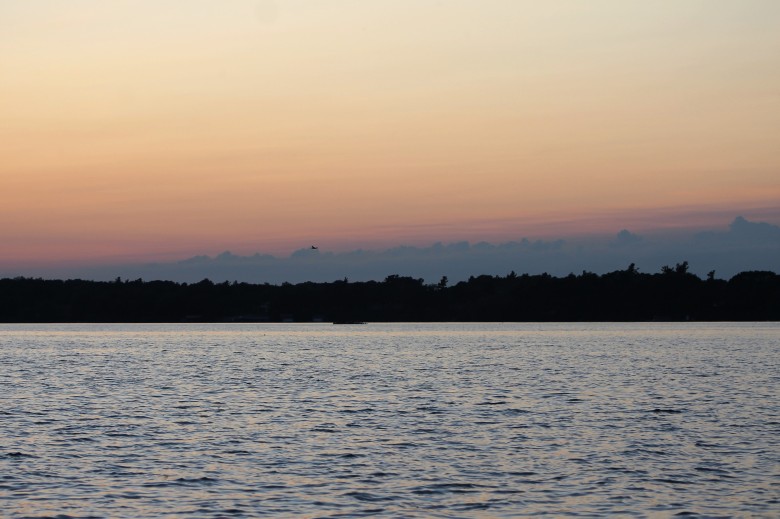 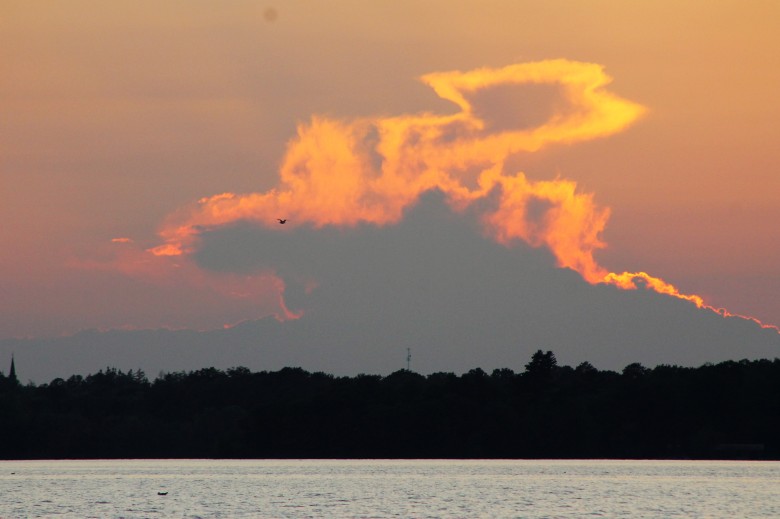 The bugs got really bad after it got dark, so we retired to the tent to read and write for the remainder of the evening. The cacophony from the insects, birds, and other animals was astonishing.