We woke up early and packed up quickly because the bugs were at it again. I cannot really express to those who haven’t experienced this, how uncomfortable and distressing being swarmed by mosquitos is, to receive countless bites, to feel stings even through thick clothing, to hear that relentless buzzing, to even have them fly in your eyes. Even the most zen person struggles with these creatures (all female, by the way. They use the blood to feed their evil brood!).

We boiled some eggs and ate them with chunks of feta cheese. We improvised many meals like this, where we have good ingredients but neither the patience nor the equipment to actually assemble anything gourmet. But camping makes you hungry, so we thrived. I also made a tea and left the lid off, so I came back to many a drowned bug. It wasn’t my intention! I had a lot to get used to in this camping life.

We got on the road by 9:30am again and drove along Lake Superior. This was a beautiful stretch of our province, with sweeping vistas and many overlooks. We stopped often to take photos. Not for the first time, I tried to take photos on the dSLR camera without a memory card in. Don’t worry, this wasn’t the worst time! 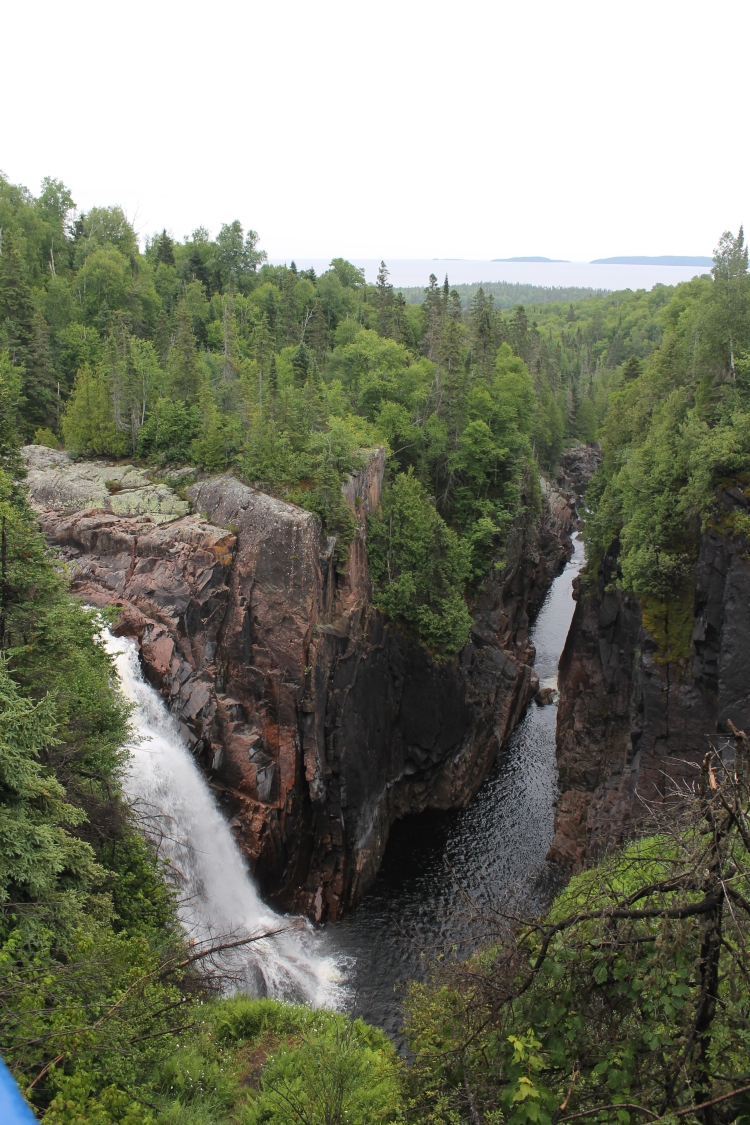 We passed time with lots of singing that day. We were feeling excited and looking forward to what the next six weeks had in store for us. We stopped in Wawa to take photos with the giant goose. We did some yoga to stretch out. Christine had hurt her shoulder, and I was sore too from all the sitting. The Tim’s there let us down – I needed wifi but there was none. I thought this was a given these days, but no. The line-up was completely out of control. I got a coffee, sis got a pop, and we shared some timbits.

And… we went to a tiny Canadian Tire and had to get proper bug spray. We didn’t even last a day with those monsters! We would continue to use the natural stuff, but only when they weren’t quite so demonic.

We drove on to Pukaskwa. This park was on my bucket list. It’s so beautiful. I’m a very rock/earth kind of person, so even more than waterfalls or pretty lakes, I love a good outcropping, a good jutting, a sprawl of Canadian Shield, a mountain. Pukaskwa is your place for that. But we passed a sign that said the campground was full, and we looked at one another with concern. Then we saw another sign, and ANOTHER, all relaying that the camp was booked.

We decided to risk it. It wasn’t too late in the day and though the sideroad to the campground was long, we had the gas. We could turn around if we needed to. We stopped to do a few things on our phones because we were losing service, then continued heading down into the park. Amazingly, there was ONE SITE LEFT. Someone had left early so we snatched it right up and slammed our cash on that counter! Well, actually, we very politely and gratefully paid with debit.

Once we set up our tents on the fairly private site, we went to the park store and bought some souvenirs. A friend of mine collects pins so I made sure to buy her some wherever I could.

We had time for a hike so we chose Manito Miikna, a 2.2k that begins in a fragile sandy ecosystem but quickly drops you into the dense, humid forest. We climbed and came out on top of huge rocky cliffs overlooking Lake Superior (yes, we drove 350km and were still camped on the same lake! Google it, because how close these two sites actually are with regard to the size of the lake will blow your mind). I took a tonne of great photos, including some of a snake that sneaked across our path. Only, oh dear, no memory card! Ugh. We ended up just using Christine’s phone, which was fine. We took lovely photos. This is truly beautiful land. There is a 60k coastal trail that I hope to hike in the next few years – having only seen a couple kilometres of shoreline, I can’t imagine what beauty that trail might reveal.

We also did the short Boardwalk trail, 1k, which was lovely and took us over really delicate dune ecosystems. We headed back to the site and had a fire. We didn’t often do that, but they were wonderful when we did. For dinner that night, we had clam chowder and boxed stuffing. Sodium, anyone? Don’t worry, I also brought my salt grinder.

Christine did the dishes, which we did by heating water on the tiny camp stove and using organic, natural dish soap and washing in a big pink plastic bowl. We sometimes left things out overnight to dry, but usually put everything away that night because you don’t want to leave even clean dishes out due to bears, and also because morning dew would make them wet again anyway.

I took some time to fill my sisters kindle with a bunch of books I’d downloaded. We are both voracious readers. She worked through several novels and I dragged along with the Neapolitan Series by Elena Ferrante.

We were expecting an early morning the next day, so we enjoyed reading time by the fire before heading in to bed. There is nothing like spending quiet time in the company of someone you care so much about; not feeling like you need to fill the gaps or silences, just periodically making a joke or sharing a particularly good line. Christine and I have always been huge readers, we have that very much in common, so we are used to being quiet in our worlds, together. It was lovely to have that thread throughout our lives, right up to that moment, so far from home and getting farther every day – but still home because we had each other.