This is a photo of me only minutes before something tragic and difficult to comprehend occurred before my eyes.

My girlfriend Kai and I were at the beaches in Toronto, by the old waterworks building. It was a chilly day with massive waves on Lake Ontario. The water was clouded and choppy. Some of the photos I took of the waves attest to the power of nature.

As we walked by the water, we saw four people, three young men and a young woman, standing in swimsuits with wakeboards. They looked as though they were contemplating going surfing. One young man tucked his board behind a tree and we thought they’d thought better of it. But he got back into the water and after a moment of splashing about in the shallows, he swam in.

We could tell the moment the water was deeper than he was tall. He went from stable and grounded to bobbing along on top of the water. He’d gone in on the left hand side of a rocky breakwall, so at worst we thought he’d come up against that and have to get out there. I even said, ‘that looks like fun,’ because rocking with waves on a lake can be a blast. We said to each other, as long as he stays within the vee of the breakwall and the shore, he’ll be fine.

Kai said to me, what would you do? I knew what she meant. What would I do if he began to drown. I knew I couldn’t jump over the wall and swim him to safety – that wouldn’t end well. I’m a strong swimmer but undertow is no joke, as we were seeing. I said I would call the police.

He went deeper out on the lake… and then he passed the breakwall. He was now in the depth of the lake, and instead of shore in front of him, there was the retaining wall of the waterworks building, which we were standing on, along with other bystanders. My eyes were trained on him, looking for drowning behaviour, which doesn’t look like arms frantically waving, but a slipping of the face/head under water. I couldn’t even tell if he was swimming because the water was so opaque and choppy.

A man came to us and said, “He must not know about undertow.” My hand was on my phone. We heard him yell something, and that was enough. I called the police. I described the situation, that I thought a man was drowning, or about to. As I was speaking to the police, we followed the man along the wall. The water was absolutely in control, throwing him closer to and farther from shore. Kai thought he would hit the wall, and we waited in fear for him to approach, but he never got that close. We thought that was a good thing…

The next break wall was probably a hundred meters away, and the water swept him so quickly I had to run to keep him in my sight as I reported the situation to the police. The operator put me on the phone with the coast guard, and I described the location and details as best I could. Only a few minutes had passed… maybe five.

I think the operator thought she’d hung up the line, because no one spoke to me again, but I heard them discuss details of the efforts the coast guard would begin, and the incident number. They seemed a little stressed but when I checked the Toronto police department twitter later, they’d had a busy day with an attempted stabbing and other major issues. The situation we witnessed still hasn’t made it to the news.

The other break wall was coming up, and there were maybe ten people on it, including his friends: one of the guys and the young woman. People were bringing all kinds of things to try to reach him – there was a pool noodle, a long stick, eventually a rope. The swimmer came up to the break wall, a mound of large rocks. But the waves were so massive that no one could get down to the water level without being submerged when the waves cascaded against the rocks. It was incredibly dangerous, but they tried.

I’d run ahead of Kai to keep an eye on the swimmer while on the phone. I hung up and Kai was back with me. We held hands and walked along the shore, all the while watching this young man struggle less and less against those waves. It just seemed so fruitless, and yet when he came up against the rocks, we couldn’t believe it wasn’t over there. I couldn’t believe that he couldn’t just grab a rock and climb up. I didn’t understand. Everyone on the rocks was screaming. People mentioned to start a human chain, but no one could make it into the water without risking their own lives.

The police began to arrive, but they didn’t bring any hope. One cop got on the rocks, his shoes giving him no grip – he wasn’t about to jump into the water. Another cop came and yelled to the group, “Whose things are these?” while pointing at someone’s wet clothing on the shore. Someone yelled back, “That doesn’t matter, there’s a body in the water!” and it was the first time the boy became a body.

Still, the people on the rocks kept trying to reach him. He was out of our line of sight, blocked by the waves and the rocks. The fire department came with long poles with hooks on the end. Not something you would use to rescue someone… just recover someone. A body.

Then something happened on the rocks. Like a deep inhalation, everything stopped. People went from moving from rock to rock, trying to get closer to the water, closer to the young man, and then just… to stillness. They just stopped moving and everyone stood up straight, all looking at the water.

Someone said later, to the police, that he’d ‘slipped under the water right in front of their eyes.’ By that point, he’d been in the freezing, violent water for fifteen minutes. He never emerged.

The police told everyone to get off the rocks. The young man’s friends were screaming and wailing. One of them threw up. He was just in a swimsuit, and Kai gave him her shirt.

We waited by the water for ages. Eventually we saw the coast guard boat, struggling against the massive waves coming all the way from across the bay. The fire department were standing about shin deep in the water with their hook.

I saw the boy’s body, I think, under the waves in the little cove we were all standing by. The firefighters saw it too, so they waited there with their hook. I thought I saw him again, just his dark hair beneath the surface. No movement.

Kai and I held each other, both overwhelmed, scared, and so sad. The police eventually told everyone to leave. The beach was closed. He was dead. The boy was a body.

I started writing this post on Instagram with a photo of myself. It seems gross to do it like that, but the photos we took on the windy, cloudy beach that day were beautiful. Eerie, even before the conclusion of the day. But when I look at them, I just see a woman who had never watched anyone die before. And now that’s changed, forever. 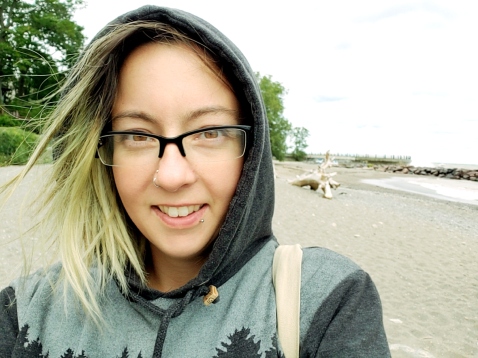 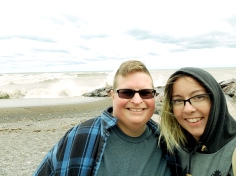 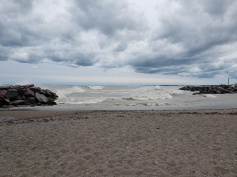