An early morning for Christine and I because we have lots on our plate! We were in the car by 8:30am after braving those nasty bathrooms again, on our way back to Waterton Lakes National Park. The park was only about twenty minutes away. We stopped at the visitor centre (which, only a few months later, burned down – along with a sizable percentage of the park in the wildfires) and planned our hikes.

The first hike was a fairly short (2.8k) but super challenging one. Bear’s Hump is a classic in this park because of the view – you oversee the iconic mountains, water, and the town of Waterton. 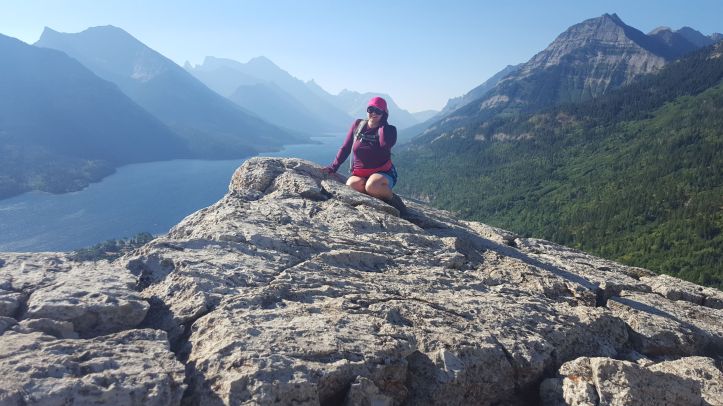 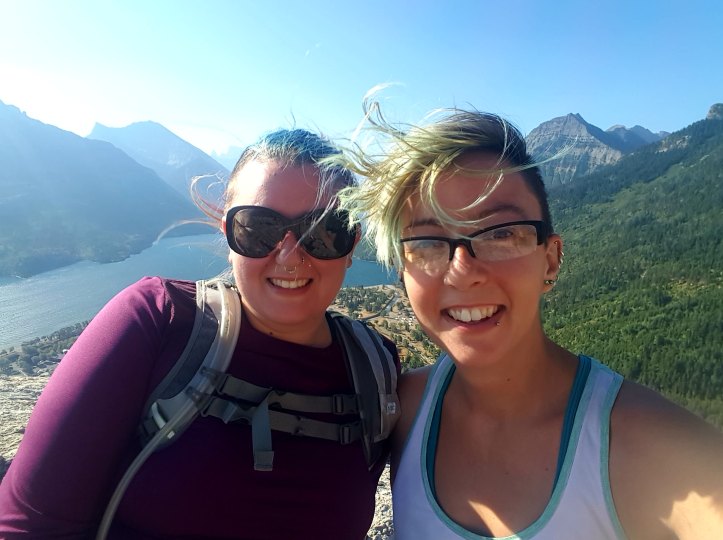 It consisted of sandy switchbacks all the way up, and we took many breaks in getting there. It felt like going straight up! When we finally made it to the top, we were so thrilled—and the blasting wind sure cooled us right down, and maybe made us a little nervous about standing near the edge of the cliff for photos. We ventured around the peak, climbing a bit higher than others to make sure we could see everything we wanted to. There was certainly a feeling of accomplishment after descending from that one!

The second hike of the day is Bertha Lake. This one had been recommended to me by a co-worker, and it looked absolutely stunning. It’s a 11.4km hike with waterfalls that leads to a remote crystal blue lake. We packed up our water and gear and started in. The first quarter was rocky with lots of short ups and downs, yet leading consistently skyward. Christine did the first 2.7k – we ate under a footbridge (like trolls) to the sound of waterfalls on either side. Christine decided she’d had enough and would head back to the car to spend some time at the beach. She was hot and had quite a stomach ache and didn’t want to risk being unwell so far from amenities. Besides, waterfalls are her jam and she saw the best one already.

I carried on without her and the terrain almost immediately shifted into switchbacks. Now that’s something I’m not familiar with in Ontario! Even our mountain hiking (in Killarney, for example) is still gradual enough that you’d do a tough incline rather than switchbacks. I quite liked it and found it very meditative. I have no idea how many I did; they felt endless. I saw lots of people coming down, I passed some and got passed by others, so I assumed the lake would be really busy. It was another several kilometres to the lake and I just plugged away, in my little hiking world where I feel so comfortable and competent.

When I arrived at the highest peak of the hike, I could see the lake. It was a blue unlike anything I’d seen – less teal than most mountain lakes, but brighter than the rich deep blues of Muskoka lakes. It stole my breath. I hurried down the hill to the lake and found only one couple there, and I waited patiently for them to explore another area. When they did, I moved into their spot, took off my shoes, and dipped my hot, swollen feet into the crystal water. It felt so amazing. It was really windy but I was sheltered by trees so I could mostly hear the wind, blanking out any other sounds, without feeling it. 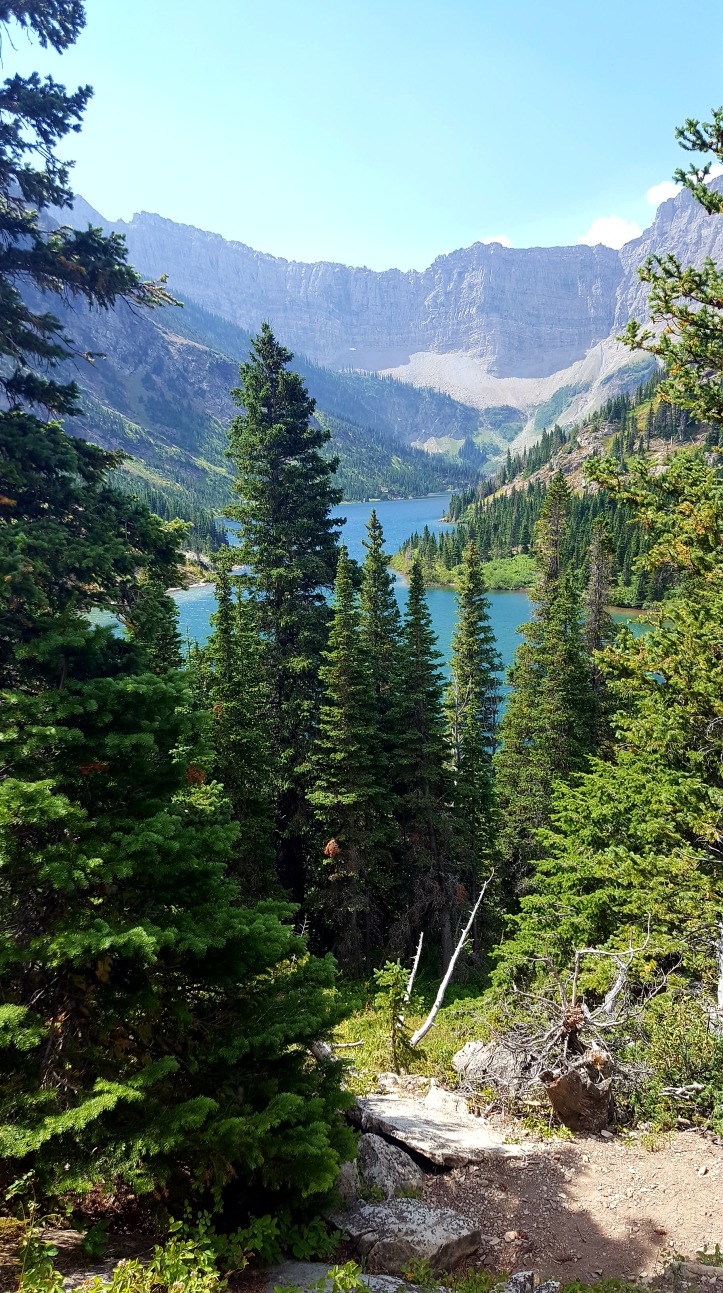 I knew this was a moment I would carry forever. Sometimes I just have that feeling – when I work so hard for something and finally accomplish it – when something so beautiful reaches into my heart and writes its language there. I was so grateful to be there. I also got to see lenticular clouds, something you only see around mountains! 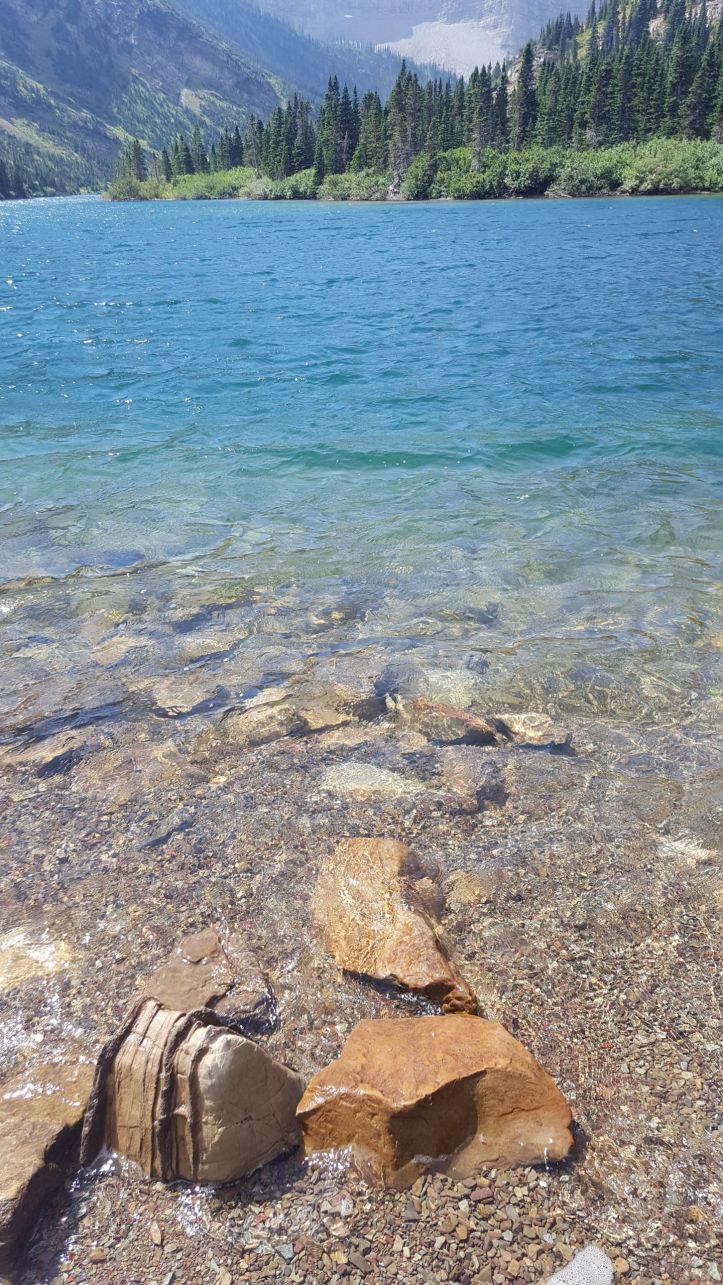 When I’d had my fill, I took my photos and headed back down the hike. It was tough on the knees going down, but better on the thighs! I’d wasted a lot of my cell phone battery by that point, so I didn’t have enough to find out where my sister went, but I figured I’d come across her somehow.

Eventually I made my way out of the hike and back to civilization. I wandered down the main road until I found a beach, and sure enough there was her car. Christine was alternating between writing and reading – the water was freezing, though I made sure to put my poor feet back in again. I’d probably done about 16k that day already.

Despite that, we still had a lot of driving ahead of us! We stopped at a store en route and got an ice cream and a poutine, which you just have to do after working that hard!

We drove about 8 more hours… Can you imagine how stiff I was? What a day! Unfortunately, Grasslands National Park in Saskatchewan was incredibly far, with us taking poorly maintained, winding roads, with no ambient light, that mostly transports travelled on. I did most of the driving and it was not a joy. We bottomed out so hard at one point I almost peed myself… The road turned to gravel and it was probably 50km on that. And then the GPS sent us to some random town that had a park kiosk, which of course was closed, instead of taking us into the actual park. We finally found it around 1am. After that long day and brutal drive, we were not in good shape. We didn’t know where we were going for a lot of it, and that uncertainty can be really hard on people. I think that was our worst night for sniping at each other – but we were SO GLAD when we finally found the overflow camping.

Overflow was just a giant, bare field, dotted with RVs and tents. We planted ourselves right in the middle and set up really quickly, forgoing pegs and just crashing. The sky absolutely glittered with stars, and because of the flat land, I could see more of the milky way than I ever had before. It was like being the bottom of a snow globe, flat with a dome overtop you. The stars were so bright – worth all the strife (which we could only realize later…).