Another hot tent morning. I woke up to the very frustrating sound of shitty parenting. This is a component of camping that I’m not thrilled about – you get thrown into the daily space of people with whom you have nothing in common. Of course, there are plenty of people who are awesome, and kind, and respectful. And then there are others… The thing that irritated my sister and me was the very gendered way this man was treating his daughter compared to his son. His son was allowed to play and have fun, but the daughter was being ‘taught’ how to properly throw a baseball (she was like four years old). She said she just wanted to throw and he would harangue her into proper form and speed – I think this was because there was another dad nearby. Let your kids live! Add to this that he was watching the kids while putting in an order of pancakes to his harried wife, who was apparently cooking for him, their kids, another husband and his kids. That is a LOT of cooking on a campstove. And I wonder who’s on dishes duty? It’s interesting because for myself and my sister, this trip was all about our freedom and breaking things down to the bare essentials. But for many women, camping only exaggerates traditional gender roles, causing more work for the mom while dad does the fun part of parenting with kids and starts drinking around 2pm. I don’t think this is the case in every family, but when you’ve been in who-knows-how-many campgrounds, you start to see it’s a pretty ingrained pattern.

Due to that annoyance, we were pretty happy to get started with our day. We had grabbed some lemon pastries and those were breakfast while we got packed up.

Our big hike for the day was Cap Bon Amie, a 7.8k hike to a high elevation, with some parts of the trek coming out to the ocean. It was quite the climb in the first part of the hike, up to a fire tower, where we cooled down and took photos.

The trail led us around the peak of a cape, high cliff sides. We were mostly in the woods but the terrain and ecology changed quite dramatically throughout the day. 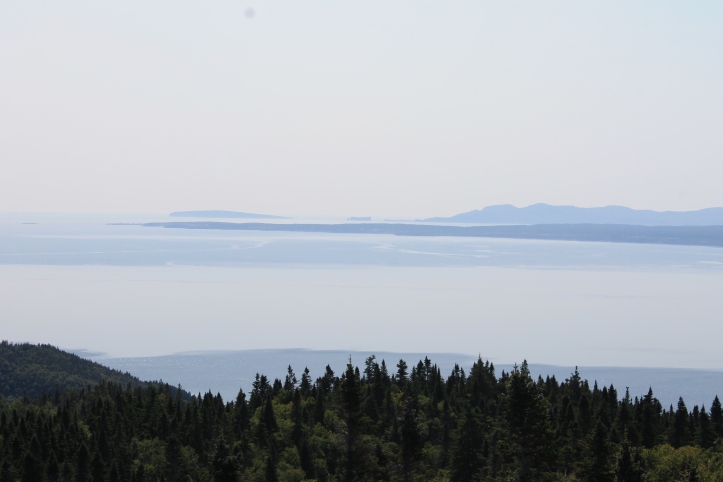 The hike was challenging, whether you were going up or down – about midway through, we were able to leave the hike itself and pop out to the ocean, so we took a break there and put our feet in the water and had a snack. 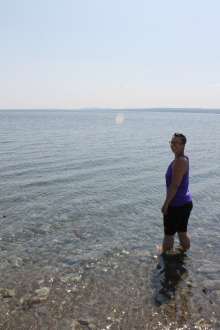 All said and done, our distance was closer to 10k, and we saw beautiful lookouts, we heard about a bear but didn’t see it, and took lots of little breaks, sometimes on provided benches – what gifts! Lots of peaks overlooked the cape, so we took photos and at the end of the hike, Christine took about fifteen minutes to photograph the seagulls divebombing into the water. 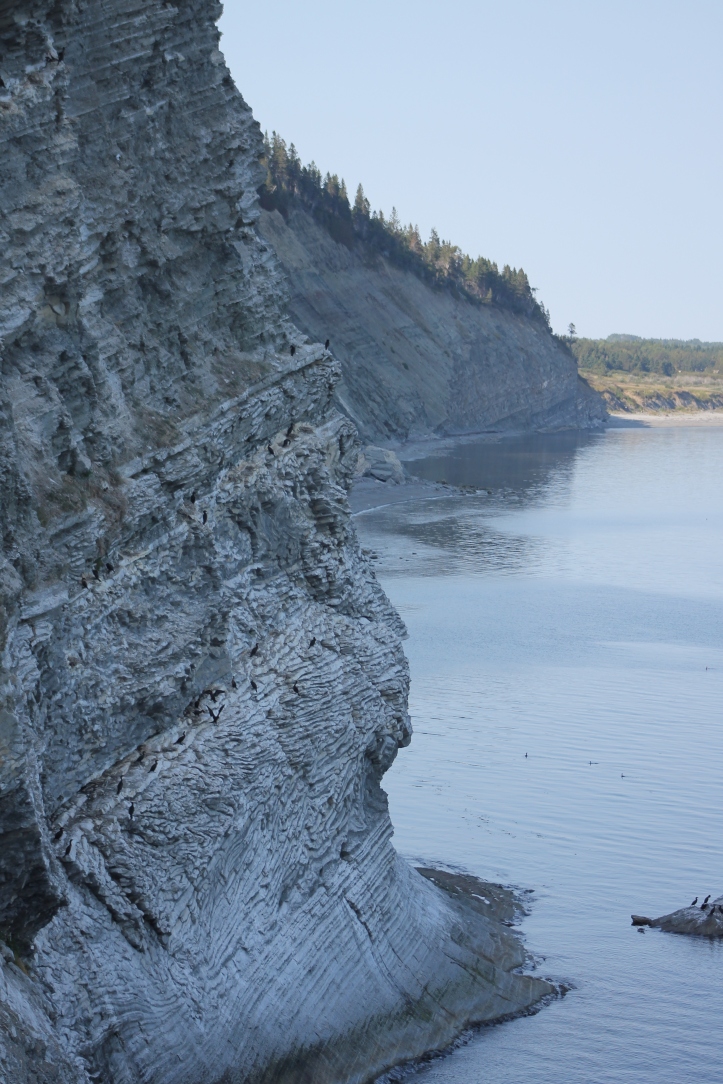 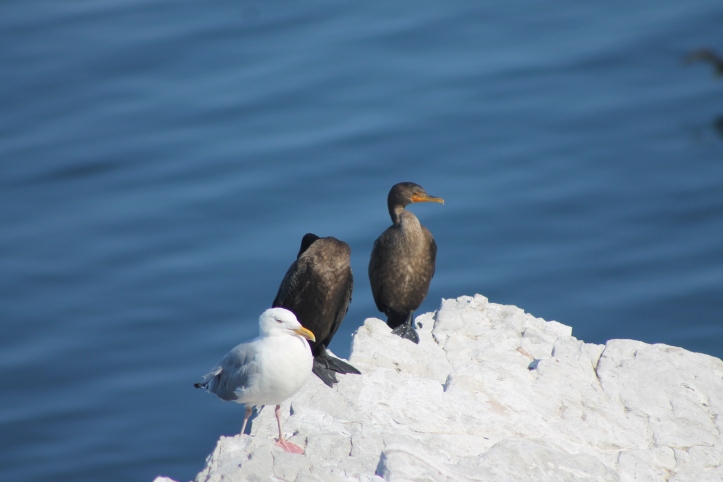 We showered before leaving the campground, and on the way out of the park we stopped at La Chute, a 1k hike to a preternatural waterfall that streamed down through lush green moss. Rather than feeling high in the sky the way we did on Cap Bon Amie, the sense of this waterfall was almost underground. We had to wait a while to get some time there by ourselves – it wasn’t busy, but the family that was there wanted a lot of photos with a lot of small variations, so we had to be patient. When we got our time with it, we were thrilled.

After that, we drove until dinnertime and decided to stop at subway. It was good because we were ravenous – and the sub sauce is different in Quebec (it’s better!). Christine had been having stomach or intestinal issues on and off throughout the journey, and indeed for some time before. Her digestion had really changed since she’d had her gallbladder removed, and I encouraged her to keep a food journal to see what actually causes the issues. It could be an acquired gluten intolerance, it could be related to foods high in fat, or certain combinations. I find that people generally don’t make connections to our bodies as often as we likely should, given we have to inhabit them forever.

We weren’t sure if we’d make it out of Quebec that day; we’d been keeping things flexible when we don’t have a Parks destination. But we did end up crossing the border to New Brunswick, which is the most eastern I’d ever been in Canada. Actually most of Quebec was more east than I’d been before, because we really only hopped over when I went to Ottawa on a grade school trip. I was really excited to do this leg of the trip – we have amazing things planned and it seemed like it would go quickly because the provinces were so small on this side. I also think that in terms of reputation, the eastern provinces are more known for being polite and not as fast paced, which I was ready for!

It was after 10pm when we arrived in a town called Atholville, which was the brunt of some very questionable jokes from us. And another time where I put the town in the GPS but not the wal-mart, so we had to double back a bit to actually get to our destination. RV village awaited us and we got set up to sleep in the car. We actually stayed up fairly late that night. I called a friend and Christine read, and when I returned to the car, we talked and both read, forgetting that we’d lost an hour with the time change! It was something that caught us off guard frequently. We never changed her car clock, relying on our phones and trying to math out what time it was based on where we were. Nothing cements the idea that time is a construct more than time zones.

So it was after 1am when we settled down to sleep.