On October 31st, Kai drove me to Royal Victoria Hospital in Barrie for my follow-up appointment with Dr. Ball, my gynecological oncologist. Because it was Hallowe’en, we were both wearing cat ears – Kai had the small, wire kind while I was sporting the oversized furry ones. Despite this, the content and tone of the meeting was fairly serious.

The doctor confirmed that the cancer is ovarian, endometrial subtype. All the rest of my biopsy results came back clear, including the lymph nodes, which means in terms of staging the cancer, it isn’t stage 3 or 4 because it hasn’t spread. But staging the cancer can only happen with surgery, and staging needs to happen in order to determine further treatment such as chemotherapy or radiation.

However, Dr. Ball is fairly confident the other ovary will contain the same cancer that the right one did when they examined it under the microscope. Her strategy is to remove the remaining ovary, the uterus, more lymph nodes on the left side. She explained that a third of young women with ovarian cancer have concurrent cancers, which is why she wants to remove the uterus, and because I do have uterine hyperplasia where they found precancerous cells, it only makes sense to do the full hysterectomy.

Well, it makes sense to an oncologist, anyway.

She also explained that, with my type of cancer, it’s not advised that I ever take hormone replacement therapy, because of the way my body responds to estrogen (by making cancer). Which means I will have the same risks of osteoporosis, heart disease, dementia, etc, as a woman thirty years my senior as the years go on. This is extremely disheartening news – I had just begun to adapt to the idea that I would have to go on HRT at such a young age – now to find out I’d have to go through menopause without any of the protective factors of hormones.

It’s a little odd to be crying in cat ears.

Dr. Ball explained a bit about what the surgery would look like: open surgery, where they’d go in through the same incision she’d made last time; 3 nights in the hospital to recover because it’s a major surgery; I’d have an epidural because of my lack of response to the pain medication the previous surgery.

I’d also get a referral to the menopause clinic in St. Mike’s hospital in Toronto, but when I followed up on that referral later, I found out they wouldn’t be able to see me for several months up to a year – so I wouldn’t be able to talk to experts on how best to prepare for menopause at 33 until it was already underway.

The doctor called the cancer slow-growing and ‘indolent’, but still feels it’s important to address it quickly and make sure it doesn’t have time to spread. She also recommended I get a second opinion, because I told her I was feeling like there weren’t any good options here and I was loath to have another surgery. In fact, when she told me she’d held a space in her operating room for me for the following week, I began to cry. I realized that I still wasn’t over the surgery that had gone wrong and the aftermath, and I just was not prepared to have another surgery so soon – physically or emotionally. Given that I was still dealing with blood clots and on blood thinners, she approved of my decision to do as she recommended and get a second opinion before moving forward with surgery.

The appointment was such a mess of questions and revelations and breakdowns – it felt like it took much longer than it did. I had to do more pre-op paperwork, which took longer now that I take more medication and have had other surgical procedures. It was hard to recognize that it would only get longer and more convoluted as this process went on.

A nurse came for my paperwork, and Kai and I left. I was moving slowly because of the deep vein thrombosis. We stopped at Shoppers to get some lip chap because we were on our way to Toronto for two days and I didn’t have any, and in the parking lot, I gave myself my daily injection of Fragmin in my bruised belly.

My appetite was demolished but Kai needed to eat so we stopped for that and I began the heavy job of processing what felt like another page in a new chapter of relentless bad news. It took ages to get to Toronto because we hit rush hour, and it was after dark on Hallowe’en night when we finally reached the neighbourhood in the Beach where our airbnb was located. It was pouring rain, and I asked that we just make a run for it rather than waiting out the rain because I wanted to feel like I was ‘home’ somewhere.

We arrived drenched, and the owner showed us around after giving us towels. It was a lovely studio in their basement with a queen bed for us to curl up in while we continued our Harry Potter marathon.

So, what brought us to Toronto despite me needing a break from the rest of my world, was the Toronto Symphony Orchestra playing along to the sixth Harry Potter movie, The Half-Blood Prince. Kai had got us tickets and we finally got around to the HP marathon she’d promised me she’d sit through when we’d first got together, upon learning what a total Potterhead I am.

We ordered Chinese food from the Garden Gate Restaurant, affectionately known as the Goof, which was soo delicious and inexpensive considering how much we ordered (enough that they gave us 6 sets of chopsticks). We got into our PJs and hunkered down in front of the TV, finishing the second film and taking a break before launching into the third, the Prisoner of Azkaban. Kai left to move the car closer to the house, now that the trick-or-treaters had gone home. It was windy as all get out, and while she was out, the power went out.

Luckily, the homeowner had shown us where to find a flashlight, so I grabbed that and waited for Kai to get back, hoping she hadn’t run into any trouble. She returned with tales of exploding transformers and wind that tried to sweep her off her feet.

We decided to continue the marathon on my laptop, fingers crossed for a long battery life.

The next day saw us move between the couch and the bed all day as we ate leftovers and finished the movie from the night before and watched two more. By 6pm, we were finally caught up! It was time to get dressed and call a Lyft (we had a coupon) to Meridian Hall. The driver was terrible, with a lead foot on both pedals, causing my already heightened anxiety to spike.

But we made it on time, and I straightened my witch’s hat, and we found our seats. Kai had got us seats against a wall, so I had that on one side and her on the other, and I felt better.

The movie was awesome and the orchestra was just brilliant. The audience was full of nerds in HP costumes – there was a house-elf sitting in front of us! It was such a cool experience to get to hear the familiar music in full force, and to see the orchestra playing beneath the big screen. 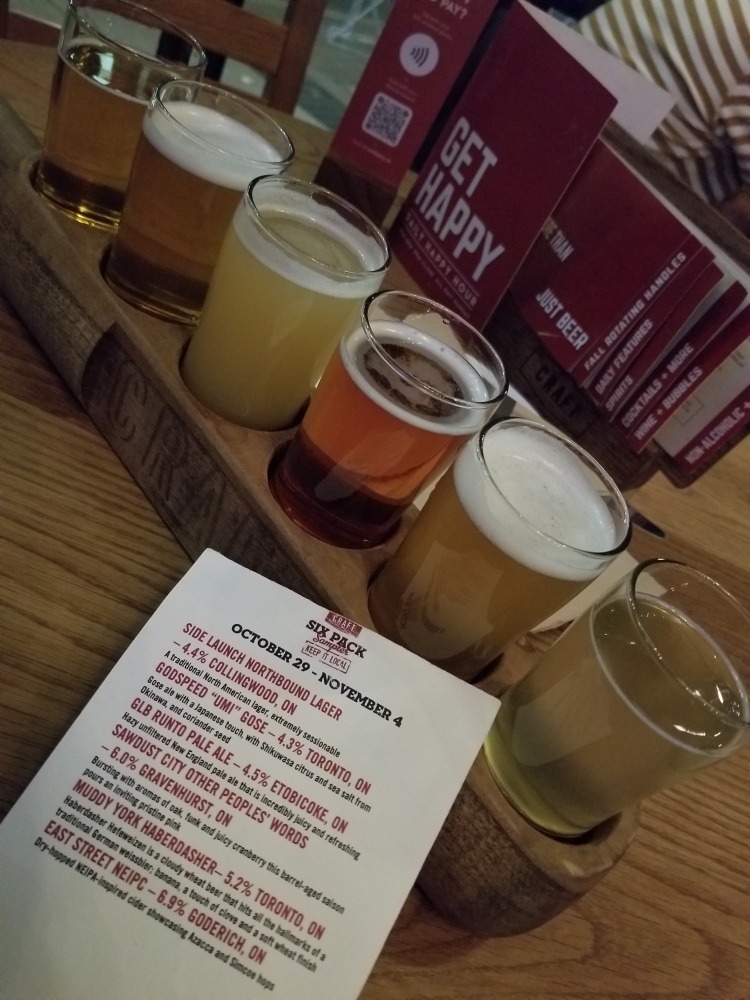 We were hungry after the show so we went to Craft, a spot that had a hundred beers on tap. We ordered a poutine and their take on Poke, as well as a flight of local beers. The place was super busy and though the food and beer were tasty, I was happy to get out of the noise –

Until, that is, we got into the cold while waiting for our Uber. There was a mix-up with the first driver where he wouldn’t drive us because his app said we were only one person and ours, obviously, said we were two. We got out and caught another one, which mercifully was just around the corner. This drive was a lot smoother and we got home in great time. It felt lovely to be back and settled.

Unfortunately for me it was another rough night of pain and nightmares, but I did get some sleep, and Kai was up earlier than me tidying up so I could sleep in. We stayed at the airbnb until one pm and then got back on the road.

As we were pulling into Huntsville, I saw that I had a text from my mom asking when I was going to be home. I told her we were at the exit, and when I walked inside, I saw why she’d messaged me.

I saw Priestess, my beloved 15-year-old calico cat sitting on my spot on the loveseat, which she would never choose to do of her own accord. I saw immediately something was wrong. She’d been at the vet the previous week due to her lack of appetite, and she’d been cleared for many major concerns and had been given medication for a thyroid problem – she’d weighed in at a mere 5 pounds. We’d been giving her the medication and she’d been eating okay – I’d checked in with my mom the previous day and she’d said Priestess was good, eating and taking her meds. I hadn’t worried; I’d been confident she would rally like she had before.

But looking at her on the loveseat, I saw otherwise. Her face was gaunt and she looked liked she’d lost even more weight. She hadn’t been grooming, and she was normally fastidious; her face and paws had food on them. My mom told me she hadn’t been eating, so I gave her salmon, and she had some, but she couldn’t really walk and it was hard to tell if she was incontinent or just couldn’t move quickly enough away from her pee and got it on her tail. I cleaned her up and held her in my arms while we watched the new Mary Poppins. It wasn’t until later that night when I set her down that I saw how much she’d declined. She couldn’t seem to walk at all and she wouldn’t eat anymore.

I asked Kai to stay the night, and I set up a little bed on an ottoman beside my bed, as Pree didn’t like sleeping on the bed because I move so much. But after a trip to the litter box, she tried to get into the bed, and I helped her. She rested on my chest, and I talked to her and told her how much I loved her, how grateful I was to have had her in my life since I was a teenager, and that it was okay for her to go if she had to.

When Priestess had been a kitten, she’d liked to crawl into the crook of my neck and nestle into my hair when I was laying down. She did this again, though she hadn’t in ages, and I helped her into position. I held her all night and around the time of the lost hour from Daylight Savings, Priestess died.

We buried her the next night, in the dark under the falling snow.