I woke up at 6am and the first thing I noticed was how well I’d slept. It’s very rare that I sleep through the night without waking up to pee even once, so it felt like the night had just raced by. I felt rested and ready for yoga! I did debate going because it was $12US and I felt that it should be included in the already high cost of the airbnb, but I decided that it was the right thing to do, take advantage of what’s offered.

The class was really advanced and most if not all the other attendees were people who worked and lived at the centre. Even though I’ve been doing yoga off and on for a decade and more recently really got back into it, it was difficult to try to keep up. I was frustrated for a bit because I felt that it was more an attempt at crossfit than yoga, but I found my own pace and did what I could. At one point we were doing Astavakrasana, an arm balance pose with the feet up and out to one side which my body simply could not accomplish, and the instructor came over and asked if she could teach me Crow pose – kind of randomly because we hadn’t been working on that, but it was great because Crow is one of my favourite poses and I hadn’t tried it in a long time. And with her support, I actually maintained the pose for a few seconds, something I’d struggled to do even when I’d weighed a lot less. So that alone made the $12 worth it – except my abs, arms, and legs were also a write-off for the upcoming days!

Kai and I packed up shortly after yoga was done and left with the feeling that we hadn’t been entirely welcome and remained very much outsiders. Which we were, I suppose.

Our first stop that day was Isaac Hale National Park, a black sand beach with a thermal pool. We sat on a slope of sand by the water and watched the waves.

We both wanted to go swimming so badly, but the waves were really intense and we had recently seen a person drown ( in Lake Ontario, so we were less eager to jump into the waves. Kai almost went in but the waves really batted her around and our feet were getting slammed by pebbles and much larger rocks. We did watch a family go swimming, but then the elder daughter had a hell of a time actually getting out of the water, with the waves dragging her back out whenever she tried to get back to the beach. We’d decided that was enough of a message to not try it that day. And when we sat on the sand, every so often a giant wave would come and hit us, and eventually one came and just about swept me away – I had to grab Kai to keep from getting dragged off to the sea! We spent a lot of time in the thermal pool instead. It was bathwater warm, which was lovely for me, but not everyone wanted that in the blistering late morning sun. Speaking of blistering, I definitely got sunburnt that day. Super sore from yoga and crispy from the sun… I was in for a rough day!

From there we were making our way to the main highway, but Kai used her adventure sense to turn down a sideroad, and we came to a beautiful jutting black volcanic cliff, with deep blue waves lapping at the cliff caves and carving giant chunks away, exposing the more hardy rock beneath. We took photos there and changed out of our swim suits. 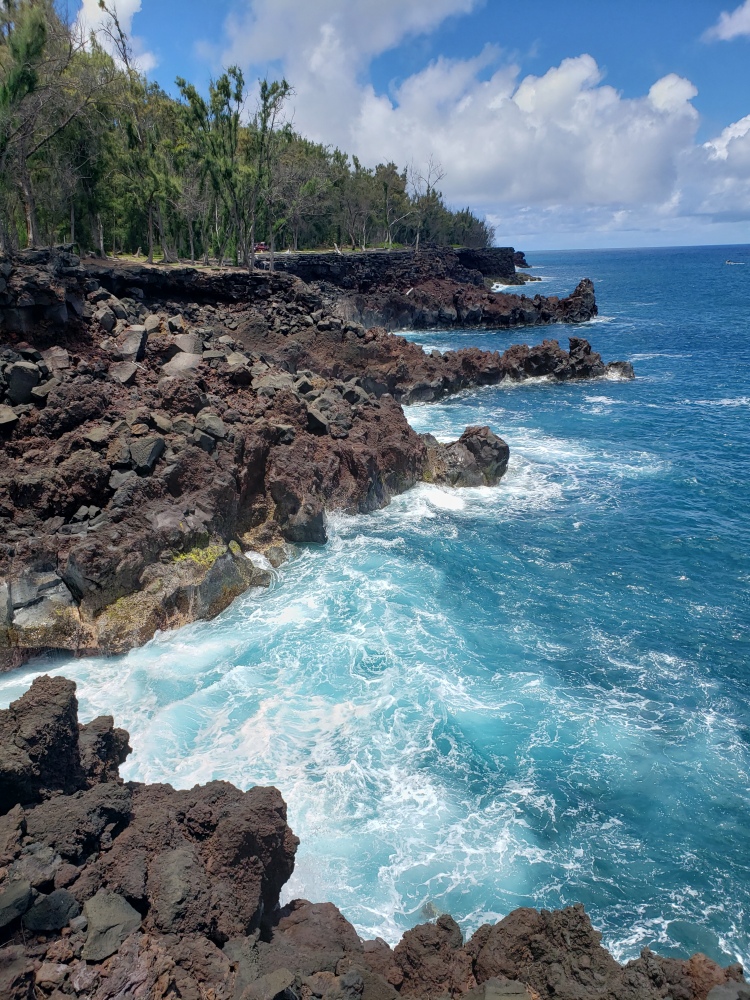 Once we returned to Keaau, we stopped at a placed called Liquid Life and got lunch. I had a sandwich called the Balsamic Beauty, with ube chips. It was tasty! We really wanted the green tea soft serve iced cream, but they didn’t have any. The food helped us get over the hump of the day and got us ready to drive up to Volcano National Park.

We didn’t have a tonne of time for everything we wanted to do at the park, but there were a few priorities that we decided we’d figure out once we got there. Entry to the park was $25USD. When we arrived at the visitor centre, the rain was just sloughing down. Guess we had to take our hikes off the list, at least for right then. I bought some goodies from the souvenir store and met Kai outside at a talk being given by a ranger. He’d lived in Hawai’i all his life and he was pointing at a place on this large diorama of the island where he’d grown up and played – which was now destroyed by the most recent eruption in 2018. It occurred to us that the Hawai’ian connection with permanency and land must be different than ours. Yes, we see landscapes change and get developed or get flooded, but the underlying nature remains. I can’t think of a time I’ve seen land that I was connected to become utterly annihilated and unrecognizable, with every trace of what I remembered, obliterated.

We then looked at the exhibits in the visitor centre and then watched a video on volcanic eruptions and the study of them by different agencies in Hawai’i. It was really interesting to see how calderas, lava tubes, and Pele’s hair were all formed.

We decided to drive down Chain of Craters Road even though it was still really raining because we were hoping that the rain would ease up further down the mountain. We didn’t have any such luck, though I really enjoyed driving on that twisting, turning road! We made it to the bottom to Hōlei Sea Arch, but alas we couldn’t see it because of the rain and fog. We turned around and made our way back up, and I hoped we would be able to visit again the next day. We pulled into Foodland to grab some ahi, shrimp, and scallops for dinner, and microwavable rice to eat it with. We also bought some coconut rum and some sponge cakes for dessert which were on sale.

The airbnb was a little tricky to find and our room proved just as difficult, but we figured it out. I wasn’t very impressed with this one. We were sharing a bathroom with another guest, which means they could have entered our room at any time, as we had only a louvered closet-type door on our side. Also, the bathroom was not in good shape and some of the amenities offered like glass water bottles and ear plugs were missing. The room also had a random microwave in it, which was unplugged, so we plugged it in thinking we could use it for our rice, but the stench that escaped it was unbearable and obviously it hadn’t been cleaned or even opened since it had been unplugged. We had our yummy dinner and a few drinks, which I especially needed because my sunburn was sooo bad and it acted as a bit of a buffer from the pain. Our host did come to help us out with the towels because we couldn’t find them, and she saw my burn and brought me a leaf of an aloe plant, which Kai graciously smeared all over me after I got out of a cool shower.

Next, the battle of Kai versus the cockroach!

Cockroaches don’t really seem to infest in Hawai’i, we only saw a couple random ones here or there, never more than two, but this one was a real piece of work. It did not want to be caught, even though Kai had no intentions of squishing it! Poor Kai was all over the room trying to contain the little bugger. Eventually, she prevailed and the coocaratch was banished to the great outdoors.

That evening, as we were getting ready for bed, I had a brutal attack of stomach pain. It felt a little like it used to when my gallbladder would go off, but it came on soo fast and made me feel so shitty I thought I was going to puke. I even knelt in front of the toilet, waiting. It didn’t seem to want to happen, so I crawled into bed, now pretty much miserable. Between my aching muscles from yoga, the killer sunburn, and the stomach pain, I could barely move. At the same time, I couldn’t sleep. Awful combination…

I did see a shooting star that night, which was a high point, but it didn’t feel like much time passed between that and the 5am roaming dog pack barking, followed by the 6am rooster cock-a-doodle-contest. 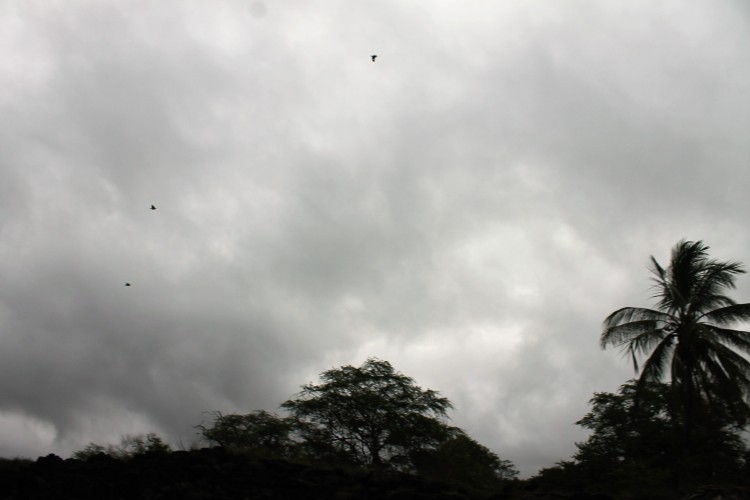