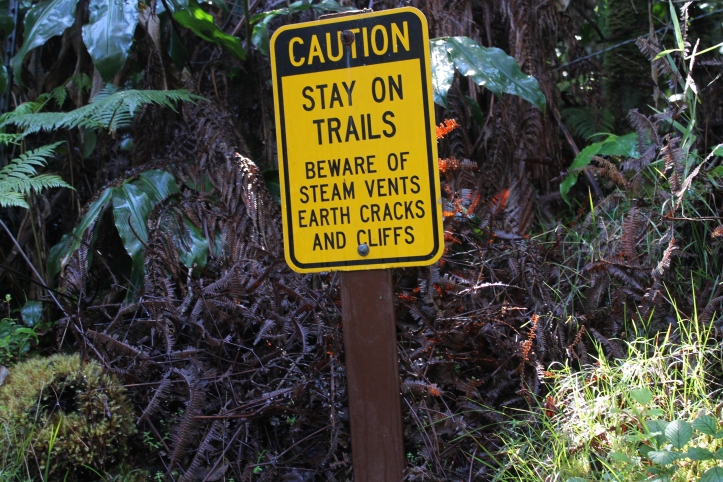 Our host was sitting on her porch when we got our day started. We did have a busy itinerary for the day, wanting to get in all the trails and sights we didn’t get to the previous day, but we still made sure to talk with her, because she was amazing. She talked about the Kingdom of Hawai’i and how a lot of Hawai’ians don’t vote because they don’t see themselves as being a part of the United States, and how Hawai’ians never signed a treaty the way Canadian First Nations people did (which themselves have not been respected by any stretch). It was a really enlightening conversation and answered a lot of questions that we’d had about how Hawai’ian people view American politics and their unique position in the world. Definitely worth the late start!

On the drive back up to Volcano National Park, we ate leftover poke and talked about everything we wanted to get done that day. The first stop was Kilauea Iki trail for me, a 6+km hike switchbacking down the interior wall of the volcano, with a 400ft elevation change, into the caldera of the volcano. I was so excited I had to come back a few hundred metres in because I forgot the camera! Kai did her own thing while I made my way down the trail.

For the first couple kilometres, the trail was easy, winding down a fairly worn path under the canopy of tropical trees so I was cool and out of the sun the entire time. Then, at last, I came out into the sun. A caldera is basically the crater left behind after the volcano collapses in on itself – in this case, it was a smooth, light grey expanse of rock with cracks and peaks of stone which came from the lava rapidly cooling and then separating. Hikers were to stay between the many ‘ahu’, which are stacked rocks, or ‘cairns’, as I know them. 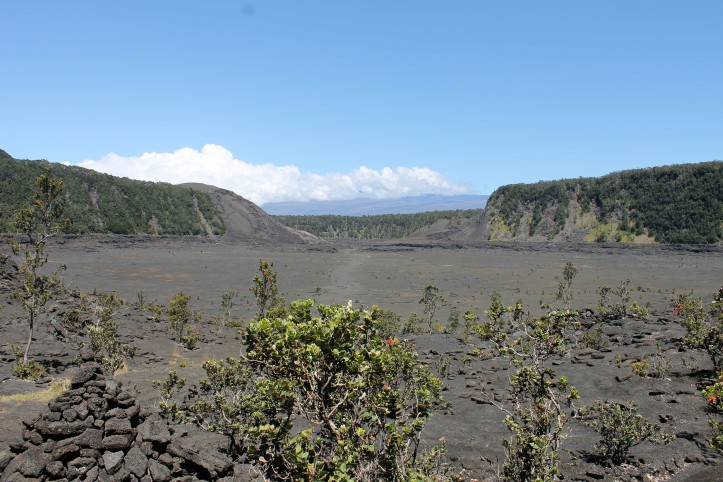 The flat, grey expanse started to heave and bulge into the point from which the magma had erupted. Chunks of the flat rock peaked against each other, and I walked to the red rock cliff, red due to the iron in the magma. There were long swathes of black lava stone, so odd because you could budge a rock the size of a car tire with your foot, since the lava rock was so light and porous. Some of the rock was rainbowed, changed by the extreme heat. There was also Pele’s Hair when you looked carefully, yellow threads of glass that formed when the magma spewed into the air and left a thin trail which cooled when exposed to air, leaving behind nearly invisible shimmers of golden threads of glass. Unlike anything I’d ever seen before. 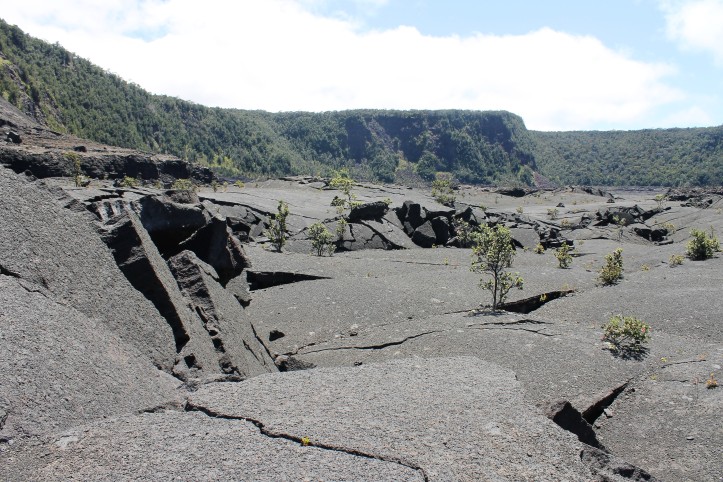 The sun absolutely decimated me. I was significantly crispy from the day before at the black sand beaches, so I wore a grey long sleeved shirt, a white buff around my neck, and Kai’s orange ball cap, along with copious amounts of sunscreen. I knew I’d been spending way too much time in the sun exploring the completely exposed caldera, so with resignation, I made my way back across the expanse. I was running low on my litre of water (I know better!) and it was all uphill from there… 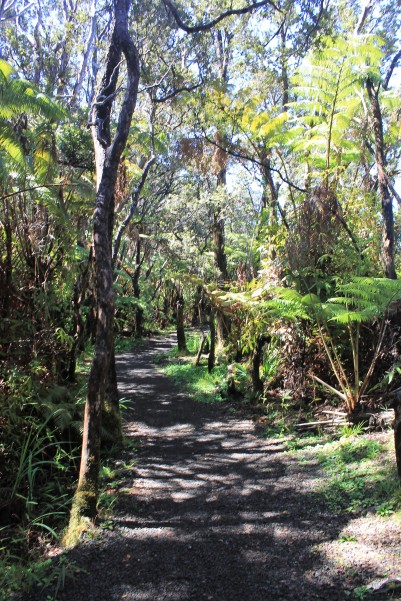 I took a break to cool down once I got back under the canopy of the trees. I pressed my back against a large cool rock and watched people pass me in both directions. Once I felt refreshed, I began the ascent. It’s interesting because I was pretty hard on myself for the effort and exertion I went through to climb the switchbacks up again, but despite feeling like my pace wasn’t up to par, I observed that I was passing everyone on the trail. Even though it was difficult, and I was panting and sweating, my endurance is pretty spectacular. I’d gained about 40-50 pounds since my cross-canada ( with my sister during summer of 2017, I’d almost allowed myself to believe that my hiking skills had disappeared, but the truth is I’m still a powerhouse and there’s no need to downplay that. I rocked that trail!

When I got back up to the car, I told Kai, who was lovingly parked in the shade, that the first lookout was only 100 paces from the trailhead (I counted for her because I wanted her to see what I’d done!). So while she checked that out, I caught my breath, stripped off my sweaty shirt and polished off her water bottle (never trust a hiker with your hydration source).

Once she returned, we filled up our water bottle and then checked out the Sulphur Banks, a paved trail to see hot and fragile banks of stinky sulphur. It’s one of my favourite smells, for some reason (maybe prepping me for fire and brimstone?) and Kai and I had the recurring joke about having to restrain me from licking it, since that’s what you do with rocks! (Right?) 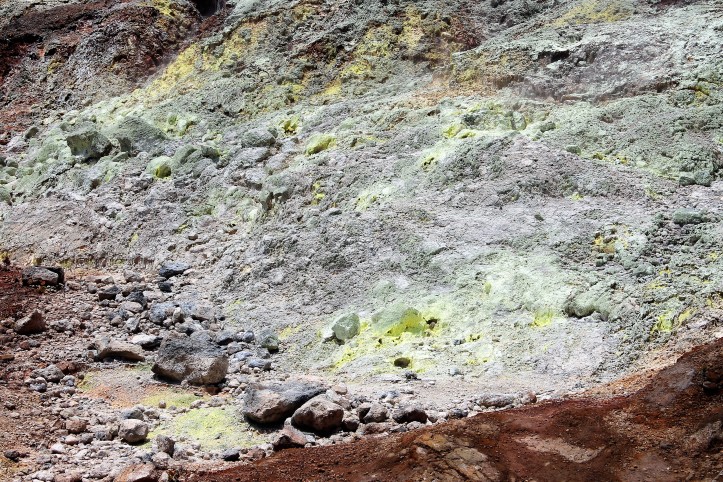 After that we saw the steam vents and another brilliant, massive crater.

I was super toasted from all the sun so back into the car we went, and we drove down Chain of Craters road again, this time in full sunlight. It took at least twice as long with all the stops and lookouts, and yes we made it to the Hōlei Sea Arch, which was neat and again reminded us of Iceland.

We made plenty of stops on the way back up as well, stopping to figure out our accommodations for the night. We decided that the Hawai’ian Style Café was the place to dine that night, and what an experience! Portions to write home about. I ordered a Longboard beer (local craft) and we shared poke nachos, which was raw tuna on fried wontons with avocado and a yummy sauce. I was feeling nostalgic for my main course and got Hawai’ian ‘french’ toast (which came with a glob of butter so big I thought it was iced cream at first), with a side of fries and gravy because hello, hiker hunger! Kai got a ‘luau plate’ with enough ube to make quite an impression. We took more than half of it as take-away but WOW, what a meal – and not as expensive as so many other spots in Hawai’i, especially when you consider the second-meal potential.

The Airbnb was about an hour from the restaurant, and we arrived after dark. We were staying at Hanakua House, in one of the main house upstairs-bedrooms. The kitchen was shared with several other folks and was meant to be closed from 8pm-9am, so we were really hoping for a quiet night. The road coming in was incredibly pot-holed, and my anxiety spiked because the rental was in my name, but Kai was feeling like I didn’t trust her to navigate a road that, frankly, was in better shape than her driveway. But we were good and so happy to made landfall!

There was a ‘free’ section in the fridge from previous guests, so I helped myself to a healthy glass of someone else’s old wine. We ventured to the bathroom together which was outside the main house with an open-air shower. I washed my underwear and dirty buff in the sink while Kai showered, and we made our way back up together.

I had two sips of the super-sweet wine and then promptly feel asleep on the massive, delightful king-sized bed. The view out the window was beautiful, but we’d only come to know that the next day. Kai reports that I snored guess obnoxiously. In my defense, my body had fully rebelled against me. Between the yoga, the sunburn, and the hike that day, I was no longer in charge of the situation at all.