The CT scan was certainly an… experience.

There were a couple reschedules, but the CT scan was booked for August 18 at 9:45am at the Soldiers Memorial hospital in Orillia. My first consultation with the gynecological oncologist Dr. Ball at Royal Victorian Hospital in Barrie was the next day, August 19, at 8:30am. Because of the close dates and early morning, Kai and I decided to get an airbnb in Barrie.

I was able to leave my night shift at the shelter a little early on Sunday morning, and Kai drove us to Orillia for the CT scan. The hospital was really quiet and we were the first ones there. I had to drink two rounds of a pretty nasty scan dye mixed with apple juice. Frankly, I’d’ve rather taken the dye as a shot rather than a diluted litre of yuck, but I’m sure there’s reason for that grossness.

Unlike the ultrasounds, I was able to pee, so I definitely did that (collapsed bladder, remember?). The tech was pretty funny and we had some banter while we were waiting for the dye to do its thing. I think it was supposed to be an hour after the first cup until the scan.

The scan itself was pretty neat. The MRI machine puts you feet-first into a tight tunnel, and in comparison, the CT puts you headfirst into a giant fruit loop, basically. Kai came in to take a couple pictures while the tech got set up.

Again like the MRI, there was an injection component to the scan. The MRI is gadolinium and the CT is iodine-based, according to my research. If I’m wrong on this, please correct me – it’s important, and you’ll see why…

Part of the fun of the CT scan comes when you get the injection. It almost immediately makes you feel like you’re peeing yourself – and legitimately. I laughed my butt off because it was so intense! I felt all warm. I did feel a little nauseated, but that quickly passed. I had to hold my breath a couple times during the scan, but the entire thing only took about five minutes.

After, I had to remain in the waiting room for about ten minutes to make sure I didn’t have a reaction to the dye. I felt a little itchy and showed Kai a hive on my hip. I noticed a couple more and with a resigned sigh, said to the tech, “So, it’s normal to be a little itchy, right?”

And he gives me a look like, no, and you know it’s not. I show him my belly where I’m covered in bumpy red splotches. He tells me I need to go to the ER, and, thinking of my airbnb with a saltwater pool, promises of takeaway sushi and vodka coolers, and I say, “Yeah, for sure.” I’m ready to make a run for it!

He must have seen the glint in my eye, because he decides to march us over to emerg personally. That was lucky because he skipped us ahead in the triage line, especially after I observed a roughness in the bottom of my throat making it tricky to breathe.

I did NOT have a good emerg experience. I went in without Kai because I honestly thought it would be really quick. It was the wrong call because I ended up alone for like four hours, really lonely and sad. About four people checked in on me and asked if I’d been given benadryl but no one actually gave me benadryl. My symptoms, luckily, had disappeared on their own about an hour in. I was moved from a private space to a hallway where, finally, a doctor came and saw me, confirmed what I’d continued to say – that I had no symptoms. I had had a line in my arm the entire time and it hurt like hell. Finally, one last nurse came and gave me benadryl and took the line out.

I met Kai outside the ER and I was really mad. I don’t normally experience anger but I was actually so upset, frustrated, and annoyed. I just wanted to spend time with Kai in our own space before the appointment the next morning, because what if it was bad news? What if that was the last afternoon I had before being diagnosed with cancer?

I tried to settle myself down, and Kai did her best as well. We made our way to the airbnb, which was just lovely. A basement space with a walk-out to a pool, covered patio set, and close to a river. We brought sushi with us and although it hadn’t been my intention to only arrive there around dinnertime, it worked out for us because we were hungry!

We had a lovely night and went for a long walk, sitting under a graffitied overpass and watching water rush through. When we returned, we talked about the upcoming appointment, had a couple drinks, and then played a game on our phones that worked like pong over the two screens, connected via bluetooth. 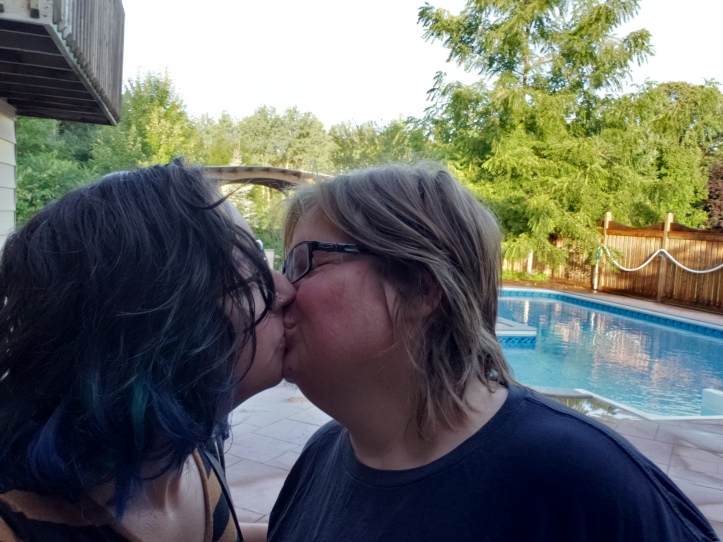 I had a brutal night because for some reason, the rib on my right side that had come out of place again before was acting up in a big way on the left side now. I tried to take some pain medication for that and the uterus pain that was nearly constant. It eventually helped enough to let me fall asleep.

The next morning, I went to RVH and we got literally the best parking spot for able-bodied people. And normally I’d ask to park far away, but my pain was such that I actually felt entitled to a good spot. The hospital volunteer helped us understand the set-up, and I took a number for registration. That took about twenty minutes of waiting, and then after that, eventually a nurse for Dr. Ball came and got me. She weighed me, took my stats, etc, and we sat in the examination room and waited for the doctor.

The RN came in first and asked me all kinds of details about my experiences with the issues, then gave me a gown and informed me the doctor would be doing an internal exam including a rectal exam.

Dr. Ball came in and introduced herself, and I got the impression she is very smart and capable. She did the exam which was extremely efficient, and then left so I could get dressed again.

When she returned, she explained essentially the same thing that everyone else had up to that point: that it was very odd that I had so many issues (cysts, fibroids, polyps, and endometrial hyperplasia with atypia) and still was getting my period. She explained the types of cysts I could have, and the avenues we were going to explore.

It was my sense that Dr. Ball was leaning toward a surgical approach, especially given that apparently nothing could be confirmed as cancer without surgery anyway. The other option was to take a two-month regimen of progesterone, then book a follow-up MRI and bloodwork and another appointment with her after those.

I decided to go that route. The downside to this approach would be if the progesterone didn’t work, and it was cancer, then for those two months it with have advanced. Dr. Ball did say that if it were cancer it would be the type to remain in the abdomen – it doesn’t become blood or bone cancer.

It didn’t seem like much of a choice – I wasn’t about to jump into surgery, knowing that I could lose one or both of my ovaries, without even trying a medicinal approach.

Once the appointment was over and we set up the follow-up for October 24th, I was about to leave but was told by a nurse to have some bloodwork done. I didn’t think to ask in the moment, but I did ask the tech who drew it why that was happening. I hadn’t been told to do bloodwork and I’d only just had some done in Orillia. He said he didn’t know, but maybe it was related to the CT dye reaction.

I picked up the prescription for progesterone and began it right away. I was looking forward to two months with no medical appointments, no more probing, and just doing some incredible things. In that two months, I have a big talk at the Algonquin Theatre, on women and resilience, and my mom and I have a five-day camping trip, along with a bunch of other mini-adventures. I was determined to make those two months amazing, because in that time, I didn’t have any answers and I didn’t expect to.

But then, on August 30th, I got a call from Dr. Ball’s office, cancelling my October 24th appointment, and setting one up for September 11th instead. Two days before my big talk. I can’t imagine it’s good news.