She Speaks: Lorena Bobbitt, Tonya Harding, and Monica Lewinsky walk into a bar…

I believe that life is about experiencing an ever-widening spiral of truths. We grow up being told one thing, and because we are young we often continue to believe it even when evidence arrives to contradict it. But the spiral insists that we examine these truths with the knowledge we have acquired during our lives – and then suggests that we change our minds. The spiral grows: we think we know something, we are confronted with contradictory information, we change our minds. This works best when we remain curious and adaptable, and we can transform our learnings into teachings.

I was seven-years old when I learned that Lorena Bobbitt had dismembered her husband. For about two decades, that was all I knew. I remember the jokes and the gasps – we were kids and we thought it was hilarious and outrageous. The only update on the story that I heard throughout my life was that John Bobbitt got penis enlargement surgery at some point, which set off another round of terrible jokes. I don’t remember ever asking myself why Lorena Bobbitt (now going by her birth name Lorena Gallo) had done this. Media explained she was jealous, crazy. I assumed she was pissed because husbands are shit (I learned this ever-widening ‘truth’ from the absolute glut of media showing bumbling, insensitive, hapless and helpless husbands utterly relying on all-suffering and tolerant tv-hot wives).

I was eight-years old when I heard that Tonya Harding had bashed in the knee of fellow ice skater Nancy Kerrigan. I remember the latter’s screams, which were aired in the living room occupied by my siblings and I. I had broken my leg a year earlier – the sounds were eerily familiar. I remember wondering why Tonya would do such a thing – it wouldn’t have been fair, and I couldn’t imagine trying to win something without being fair. Another caricature: evil, ruthless woman. I didn’t know for another two decades that it hadn’t been Tonya at all who had swung the bat.

I was 12-years old when I learned about Bill Clinton and Monica Lewinsky. The jokes were absolutely rampant on this subject – the content of too many SNL skits to binge in 24 hours. I remember thinking it shouldn’t be that big of a deal. It was only an affair and I knew those happened all the time. She was cast in the role of home wrecker, sleeping her way to the top. When I think back, I realize I had thought the former president to be much younger than he was and Monica much older. I didn’t really understand why everyone seemed to think she should be so ashamed.

This column is inspired by the New York Times article, “You Know the Lorena Bobbitt Story. But Not All Of It.” Now I know that Lorena Bobbitt, the night of the incident, had been raped. When I learned this, my mind slowed and widened to accommodate this new information. Everything I thought I knew shifted to make space. It made sense, finally – women who experience systematic abuse at the hands of a supposed ‘loved one’ can exhibit signs of extreme dissociation. Abuse is traumatic. Traumatized people don’t respond in ways that we consider ‘typical’. Her action was a desperate attempt to disarm him: she knocked the gun from his hands; she kicked the knife across the floor. Now she is an advocate for women who experience sexual abuse and hopes to open her own shelter. My spiral widens.

The media portrayed the battle between Tonya Harding and Nancy Kerrigan as a bitter rivalry, with one party willing to do anything to win. I won’t downplay Tonya’s role in the assault – she apparently knew of it and approved, providing her husband with Nancy’s location, who in turn passed it along to the man who committed the attack. Tonya, however, discloses extreme abuse and neglect in her childhood and repeated violence in her marriages (both to the same man). Traumatized people don’t always respond in ways we consider typical. The media portrayal of this issue completely skewed it beyond recognition and made it so my young mind almost-indelibly cast Tonya as the heartless aggressor. I was a child watching this play out. Was there no responsibility to me, witnessing this extreme violence followed by jokes and skits at the expense of these two battered woman?

When I watched Monica Lewinsky’s Ted Talk, The Price of Shame, I learned that she was 22-years old during the affair with Bill Clinton. She began as an unpaid intern, only earning a wage the same year the affair began. Bill Clinton was 27-years older than her. No one thought it was a completely unethical and obscene abuse of power? Americans are raised to believe their president is the most powerful man on the planet. What would a ‘no’ have done to her career? Why would the president ever put a woman only a couple years out of her teens in the position of having to turn him down? She would have been acutely aware of the repercussions. Might she have thought her career would be in jeopardy if she refused his advances? Should he not have been held to the highest standard of integrity and justice? The spiral grows.

And I’m not talking about morality here. This isn’t about his marriage, like my calls for Tony Clement’s resignation are not about his marriage. This isn’t an issue of family values. This is an issue of power and control. In each and every scenario, there were men in positions of power over women who used that power to rape, harm, and exploit. And the story was spun beyond recognition to make the woman the guilty party – and not just regular-guilt but irredeemable, caricaturesque guilt. I am not suggesting that men do all the cruel things and women are endlessly angelic (I add this caveat for the inevitable ‘whatabout’ers that arrive in the comment sections of my columns). But I am revealing that absolute power does corrupt absolutely, and who, in our current society, holds absolute power?

Well, perhaps not ‘absolute’ anymore. And thank goodness. Because the more I read and learn and experience and grow, the more I see that, indeed, the things I learned even five years ago have been turned on their heads to uncover deeper and more meaningful truths. I am grateful for this because I exist to lead with love, create, and share my voice – and I want to learn, I want abuses of power disincentivized, I want to see monopolies of power eliminated, and I want women in decision-making roles when they are the best for those roles. No joke.

I hope that we can all look deeply into the ‘truths’ that we assimilated before we learned discernment and apply a new, more rounded and generous understanding to them. It is not a negative thing to say, “I did not know that,” “I never saw it that way,” “That information wasn’t available at the time, but now that it is, I’ve changed my mind.” Stubborn resistance to new information in order to save face is something that children do. I used to insist on pronouncing words as I read them, with emphasis improperly applied, because I thought I knew what was right. Now I say, “How do you say this word?” and kind people explain with only a little smugness. The spiral grows – so should we.

Talk to me in the comments, or leave your thoughts on the Doppler Online website. 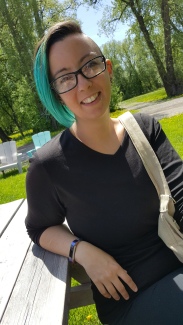 Kathleen May is a writer, speaker, and activist. Her work in our community includes co-founding the long-running Huntsville Women’s Group, being a Survivor Mentor in the pilot survivor-to-survivor program through MPSSAS, co-facilitating instinct-unlocking workshops for women through I Got This, working as a host and community producer of Herstories on YourTV, volunteering with Women’s March Muskoka, and her role as a front-line counsellor at a women’s shelter. Kathleen is a 2018 Woman of Distinction for Social Activism and Community Development and also received the Best Author award for her 2018 submission at the Muskoka Novel Marathon, a fundraiser for literacy services. Her dream is a sustainable women’s land co-operative in Muskoka.