Because it’s Newfoundland, we woke up to rain. Green Point campground was pretty soggy, but we pushed on. Our tradition with the rain is to just wrap the dirty, wet tent up in our tarp and wait for sunshine to lay it out in. So we did that, and with only the one tent, we were out of there in good time. Neither of us slept that well but our agenda for the day was kind of exciting, so that always helps to motivate.

Our drive in the morning was long and winding. We’d had other hikes on our to-do list, but with the rain we knew not to try to overdo it or we’d miss out on the one we really wanted to do. We drove to Tablelands, a really interesting hike over Earth’s exposed mantle. Normally the mantle is about an average of 30 kilometres beneath the crust, but in this particular region in Newfoundland, it’s been thrust to the surface. It’s very unique geologically, but without that information, you may just think it’s another slightly odd region of Canada.

I was looking forward to this hike because I love geology and just think it’s so special when you get to experience things that are rare like that. Not many places on our beautiful planet have exposed mantle. 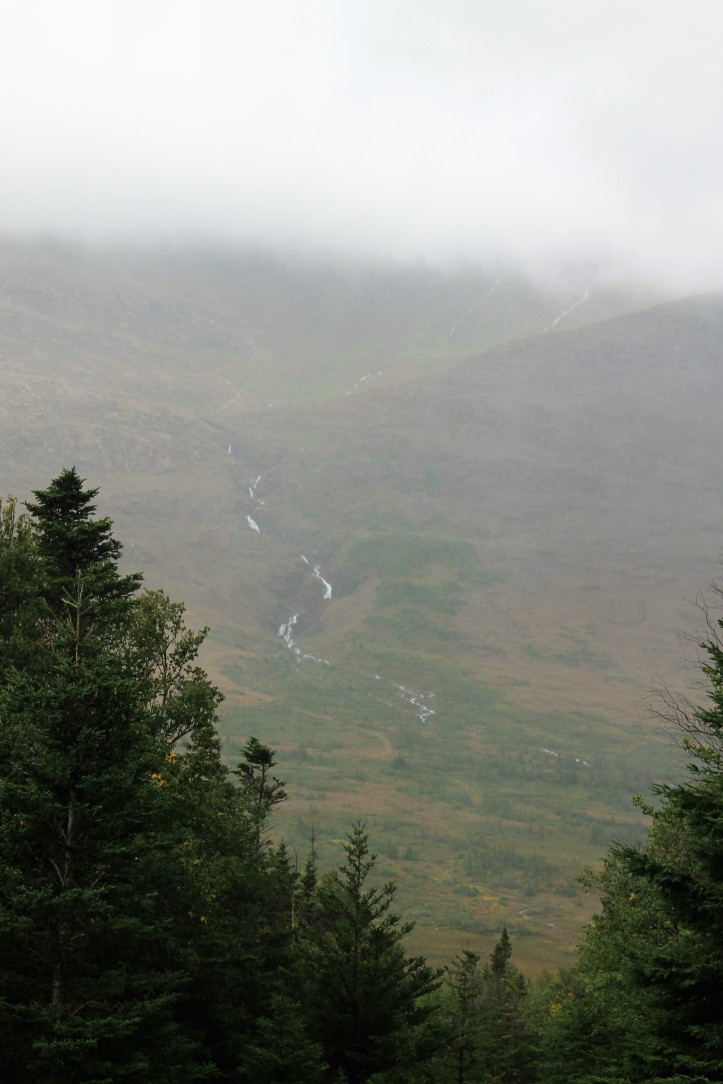 The rain, when we arrived, absolutely blistered. Not much grows on the mantle, so the wind can really whip around the massive hills. We really got pelted but we tried to hike hard to keep ourselves warm. The hike was easy and really neat, with waterfall streams along the way, culminating in a really unique swirling circular rapids and waterfall. 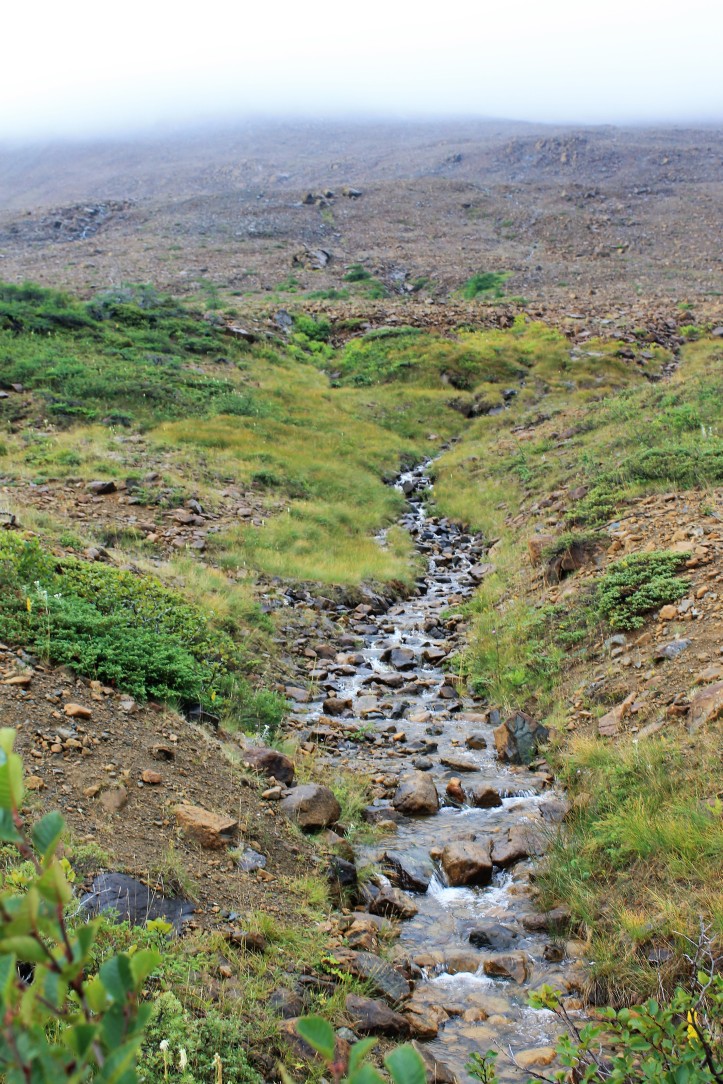 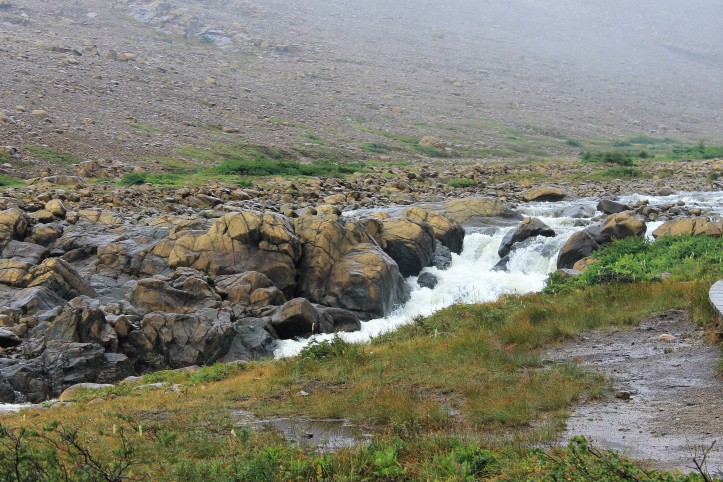 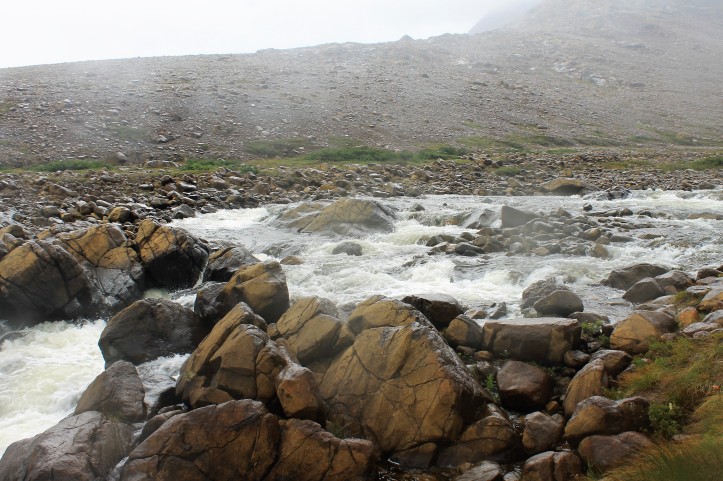 Hiking off trail is permitted at Tablelands, so I left Christine there at the waterfall and hiked up to a really interesting feature where the mantle was exposed in large chunks rather than appearing as just regular land with a rust-coloured tinge.

I got soaked on my way to the outcropping; the ground was saturated with water and you couldn’t really tell until you stepped in it whether it was going to be that wet or not. But I collected some rock specimens in a plastic baggy because I wanted the opportunity to look at it up close when the rain wasn’t fogging and smearing my glasses. 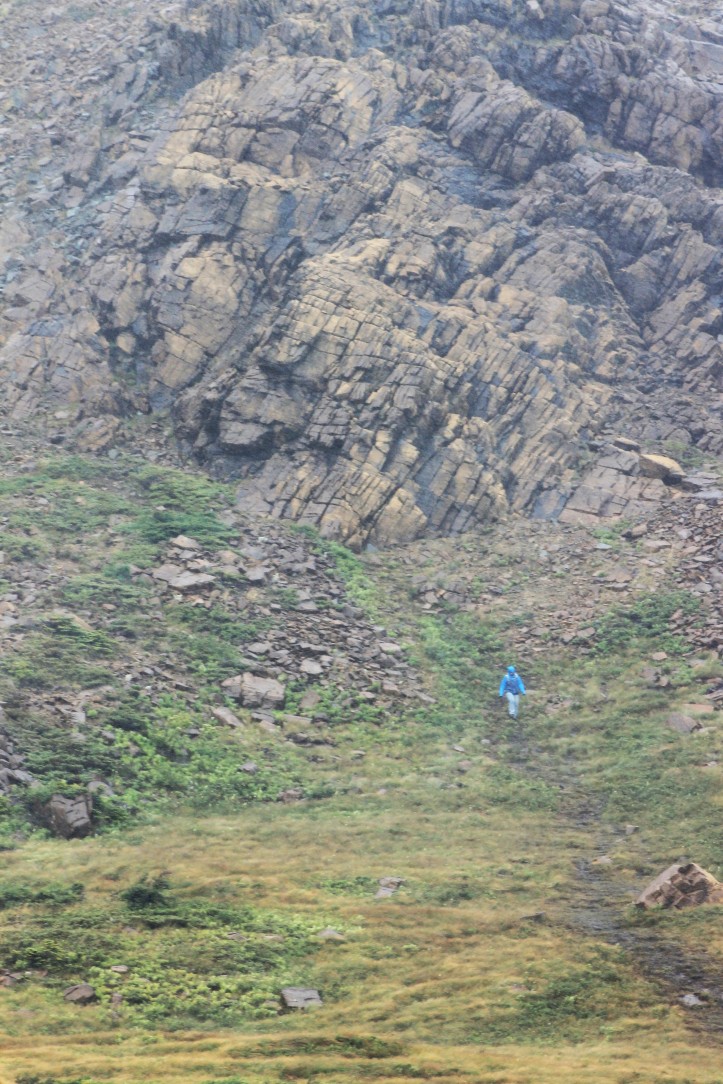 When I returned, Christine was totally drenched and freezing because she hadn’t been moving like I had. She was a real trooper for waiting for me, though – and she’d been taking pictures of me hiking, which is such a rare treat for me because I mostly hike solo.

We made our way back to the car and saw a couple hikers starting out. They asked us how it was and we told them we’d really enjoyed it. At first they said we didn’t look that wet but then I showed them the one dry spot on my pants so they could see the contrast. I wasn’t ‘mostly dry’, I was totally soaked. They went back to their car and layered up; and we changed into some drier clothes.

We tried to find a bakery, a particular one that had been recommended, but when we finally found it after GPS giving us an epic runaround, we discovered it had closed with the end of summer. Another huge difference between Newfoundland and Muskoka: our ‘end of tourist season’ is late October because of the ‘leafers’ – the people who come to see the colours change on the deciduous trees. So our town’s summer shops don’t close down until late fall. But Newfoundland? As soon as September rolled around, it was over!

We were able to get a few baked goods from the grocery store attached to the bakery, so we were pretty happy about that. We had both wanted hot chocolate and warm treats, but we could definitely make do with the three styrofoam trays of brownies and other goodies. We also got to have a really interesting conversation with a woman who was fairly new to the area, having come from Placentia. If you’ve never looked up the awesome names of towns in Newfoundland, I encourage you to.

At the first Tim Horton’s we came across, we ordered Earl Grey teas and then got gas. We drove for about 5 hours, clear across the middle of the province, making our way from Gros Morne National park on the west side to St. John’s on the east.

Around dinnertime, we pulled off to a visitors’ centre to use the bathroom, but it was closed. We decided to stop and cook up some food for dinner, so we tucked in behind the centre and used the camp stove to heat up some beans and make stuffing. We also had our fair share of pickles. A proper feast! We were there for about an hour and really happy with the food we’d put together – that hiker hunger had us ravenous!

From there it was about another 2 hours to St. John’s. On the way, there was a tragic moment. I was driving and I hit a bee. The poor thing was caught on the windshield wiper and was flailing in the wind. I pulled off to the side of road, not really thinking I could save it but knowing I couldn’t bear to look at it’s little body while I was trying to drive. I absolutely adore bees. I freed it from the wiper but it was dead. I cried over the death – I know we had ploughed through countless insects on our journey – the front of my sister’s car was a veritable graveyard. But this just felt really bad.

I drove on again until we arrived at the wal-mart in St. John’s and we pulled into a rather modest RV village. We moved all the bins into the front seat and set up our sleeping mats and bags and got ready for bed. We both stayed up reading, and writing in our journals, for a while and then crashed.